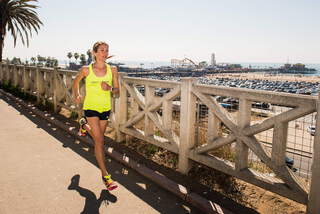 In a year that marks a global comeback for road racing Rupp stands out as one of the most decorated runners on the track and in the marathon. Hall aims to rewrite history by breaking the American women’s marathon record of 2:19:36, set in 2006 by Deena Kastor.

“We are thrilled to welcome Galen and Sara, two of the most talented runners in U.S. history, to our start line this fall,” said race director Carey Pinkowski. “This is a celebratory moment not only for U.S. running, but for the global running community. The resilience and determination that Galen and Sara have shown throughout their careers is the same kind of resilience and determination that lives within every runner showing up in Grant Park this fall.”

Rupp, a four-time Olympian with a bronze medal in the marathon and a silver medal in the 10,000m, will make a quick turn-around to Chicago after going for gold in Tokyo. In 2017 Rupp became the first American male since Khalid Khannouchi to win in Chicago. Shortly after his performance in 2018 (2:06:21, 5th place) he underwent surgery to correct Haglund’s Deformity. In 2020, on an unrelenting hilly course in Atlanta, Rupp dominated at the 2020 U.S. Olympic Marathon trials to make his fourth Olympic team. If Rupp wins he will be only the seventh man in to win the Bank of America Chicago Marathon twice.

Hall started out as a middle-distance specialist and slowly migrated to the roads. She finished 10th in Chicago in 2015, But her achievements in 2020 were oof a different order. Failing to finish at the U.S. Olympic Marathon Trials Hall refocused to record 2:22:01 as runner-up at the London Marathon last October (one of the only elite events in 2020). Eleven weeks later she won ‘the Marathon Project’, with a personal best of 2:20:32. Hall enters this year’s Chicago Marathon with the goal of breaking Deena Kastor’s 15-year old American record.