The emergence of world-best times in the 1980s

Sprinting up the hill 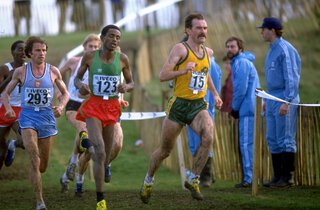 The early 1980s were golden years for marathon running. Many races throughout the world had followed the example set by New York in 1976 by expanding onto the streets of major capitals. Instead of the few hundred runners who had previously entered race organisers began to count their numbers in the tens of thousands – and even then had to reject most applicants for lack of capacity.

Marathons in Stockholm, Barcelona and London were explicitly modelled using the New York prototype but most sought to find courses that, while remaining scenic and touristic, were flatter and faster.

The ‘world best’- a phrasing meant to reflect how much courses on which marathons were run could vary – had been set by Alberto Salazar (USA) in winning his second New York title on 25 October 1981 in 2:08:13. The New York course wasn’t easy, with significant climbs at the start, at 25km and something of a switchback over the last 5km in Central Park.

Rotterdam emerged as a course on which faster times could be run compared to the much more variable inclines on the New York and London courses. The inaugural race was held in on 23 May 1981, won by the British runner John Graham in 2:09:28. It was clear from the start that it was a course on which a ‘world best’ could be set and this is what the organisers were targeting. It was only in 1985 that the New York course was found to be about 150m shorter than the prescribed 42195m, so the task was in fact a little more difficult than it might have appeared.

Six weeks after Salazar’s performance in New York the Australian Rob de Castella had won the Fukuoka Marathon on 6 December in 2:08:18. This was the de facto world best mark of the time although it did not become recognised as such until 1985. Fellow Australian Derek Clayton had been the first man to go under 2:10 in setting a world best time of 2:09:36 in Fukuoka back in 1967. Two years later he improved this mark to 2:08:33.6 – the mark Salazar thought was the one to beat – but on a course in Antwerp which was widely regarded as short.

Since those two standout performances both Salazar and de Castella had followed up with wins in 1982, de Castella taking the Commonwealth Games title in Brisbane in 2:09:18 and Salazar narrowly winning the Boston Marathon in 2:08:52 and taking his third consecutive New York Marathon title in 2:09:29.

In putting together the elite field for the 1983 Rotterdam Marathon the organisers could bill a ‘clash of the Titans’ in the match-up between Salazar and de Castella. They were without doubt the two leading contenders in marathon running at the time.

Thirty-six years before Eliud Kipchoge’s “1:59 Challenge” took place in Vienna, the Rotterdam organisers were thinking along similar lines. Unlike the point-to-point races, which were already getting close to 20,000 runners, Rotterdam limited their field to 4000 so that the race could be run on a course featuring a large lap within woodlands which protected runners from the wind, run three times.

In New York and in Fukuoka neither Salazar nor de Castella had been paced. They had lined up against genuine competitors who were there to perform to their individual best. There was no one in either race prepared to act as a workhorse for them. Pacemakers had become common on stadium athletics tracks for events from 800m upward – most famously to assist Roger Bannister in running the first sub 4-minute mile – but they were still practically unknown in marathons. As another measure towards securing the world best time Rotterdam brought in John Graham to ensure that the early pace did not fall off world record schedule.

For someone the press often considered brash, Salazar parried pre-race questions with what almost appeared to be self-doubt: “You never know for sure – a lot of things can happen in 26 miles”. Neither was de Castella bigging himself up: “Pressure is a personal thing that you put on yourself,” he declared.

The scenes on the startline would look chaotic compared to what happens today. Runners of modest credentials would use their elbows to try to force themselves onto the front rank for the best possible position when the gun went and the top runners had to contend with them as best they could.

Graham led the field out as planned with Salazar running alongside him but the pace was a little bit faster than planned. “The traffic and the crowd control wasn’t really very good,” said de Castella – and lack of crowd control barriers was a feature of most marathons at this time. “It was very difficult to maintain your concentration when there was so much happening around you. You had to block out every other thing on your mind and concentrate on what you were doing. I can’t remember at any stage being flustered although once or twice they really interfered and we had to physically charge our way through.”

At 10km (30.21) the leaders were a few seconds inside the target time – what was unofficially being called the “New York World Record” of 2:08:13. At halfway Graham pulled out. “I knew that if somebody didn’t start to press very soon then we wouldn’t have a chance to get the record.” said Salazar. “Rob started pressing the pace with about 5 miles (8km) to go. With probably a little less than four miles to go I thought that I’d be able to stay up there but then he really picked it up; he started sprinting up a hill. I was waiting for him to slow down but he didn’t. They started to pull away. In the last two or three years nobody had pulled away from me during a race; I knew I was in trouble.”

“They” were de Castella and Carlos Lopes. Lopes was an accomplished cross country and track runner who had dropped out of his debut Marathon five months previously after colliding with a wayward spectator. He had won the World Cross Country Championships back in 1976 but had then suffered a long period off with injury. He returned in 1982 to set a European 10,000m record and finish second in the world cross country on 20 March 1983 – ahead of Salazar and de Castella who finished 4th and 6th – just three weeks before the Rotterdam race. Coming from a track background Lopes had great speed but rarely seemed to find enough at the finish to burn off opponents who were still with him on the last lap.

“It wasn’t until two or three kilometres later [after ‘sprinting up the hill’] that I realised we had broken away Lopes and I, and we were the only ones – everyone else had dropped off,” said de Castella.

“For the whole last 5km he was on my shoulder, running right by my side. I was trying everything to get rid of him but he was hanging in there almost as a shadow. Once or twice I eased back to try to get him to lead but he just eased back too. I wasn’t sure if he was tired or just super confident that he could get past me at the finish.

“1000m to go, 500m to go and he was still there. I thought: is he going to sprint off and leave me or will we be neck and neck right down to the line? [Then,] with only a couple of hundred metres to go I sensed that he had lost that little bit of contact. As soon as I sensed that I really picked up and put everything I had into it. Even as I crossed the finish line I didn’t know where he was.”

Lopes was two seconds behind de Castella in a new European record, and Salazar a minute and a half behind in fifth place.

Four months later, in August 1983, De Castella went on to win the marathon in the first-ever World Championships in Athletics in Helsinki in 2:10:03. Salazar, who had been undefeated in the marathon until he ran in Rotterdam, repeated his fifth position at the end of the year in the Fukuoka Marathon (2:09:21) and finished as runner-up in the US Trials for the Los Angeles Olympic Marathon (2:11:44). Lopes ran the 10000m at the Helsinki World Championships but after leading until 200m to go was again outkicked and finished sixth. This result seemed to convince him that he would be better off contesting the Marathon in the Los Angeles Olympic Games the following year, although not long before the Games he paced his compatriot Fernando Mamede to a new 10000m world record of in 27:13.81 with Lopes recording 27:17.48, also inside the previous record.

The three met again in the Olympic Marathon at Los Angeles along with another favourite, Japan’s Toshihiko Seko. Lopes was 10 years older than many of his rivals but, in warm conditions, ground down the opposition and after 35km surged ahead to win by a margin of 200m in an Olympic Record, which lasted until 2008, of 2:09:21. De Castella rallied to finish fifth in 2:11.09 while Salazar faded to 15th in 2:14:19.