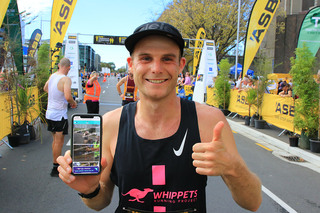 As race after race was forced to cancel during 2020 it seemed as if distance running as a sport was dying. It became individualised both in training and competition, as events dried up or became ‘virtual’. The celebratory nature of the sport became lost in a socially-distanced wilderness.

But some used the break from the normal calendar of organised events to good effect. Race organisers planned ways in which some kind of live event could be made safe for the new conditions, and many race providers re-thought what services they could bring to an event.

Marathon-Photos came up with a new idea of what ‘live’ could mean in race photography. They developed a new concept of what they could offer to race participants. The effects of Covid-19 on endurance events allowed the company to focus on development of the hardware and software used in production of the live system.

Marathon-Photos founder and managing director Francis Kay explains: “Programming during normal times is like fixing a plane while it’s flying. Covid-19 gave us a unique opportunity to focus on some major projects and get them finished.”

New technology developed in ‘the year that marathons vanished’ allowed images to be uploaded, identified and placed online within seconds of being taken.

The Christchurch Marathon held in New Zealand on 11 April trialled the service. New Zealand’s long Covid-free status, along with it being where Marathon-Photos had originated, made it a convenient testing ground. The event had 630 marathon runners entered, 1500 in the Half Marathon and 950 in the 10km – along with smaller supporting events.

There have been more LIVE events since as the technology is constantly refined.

This wasn’t the first attempt to push the limits of what could be delivered in the field of live photography.
“We first photographed live in 2015 at the Oxford Half Marathon in England,” says Kay. “Runners had finish photos posted to their mobile phones before they’d left the finish chute. It was a successful project but it required bulky infrastructure and satellite dishes, so it wasn’t a very expandable option.”

Programming and technology developments since then have allowed the company to produce portable devices that can be issued to photographers on the course and at the finish of any event.

“We’ve been photographing events since 1999 and we know that these days people want their photos instantly. That is what we are doing here and now – it’s real-time live,” says Kay.

The company has also launched its new website MarathonPhotos.live, in commitment to the live ideology. Live service will be rolled out worldwide as major events start to ramp up again this year.