Personal attention to every runner in the city of Rembrandt 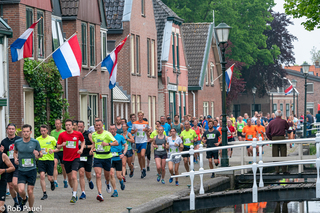 The Leiden Marathon has a picturesque course that combines the best of the city and countryside in the Green Heart of The Netherlands. This loop course is flat and fast, giving you the chance to improve your personal best.

The race starts in the heart of ancient Leiden, the 900-year old city of Rembrandt, and takes you on a sightseeing tour through nine beautiful villages with traditional polders (land reclaimed from the sea), windmills and cows staring curiously at you while you run by. Enjoy the superb organisation and exciting atmosphere aided by the enthusiastic spectators lining the streets as Leiden Marathon celebrates its 30th edition – not in May 2020 or May 2021 but, after a long wait – you know the reason, on 10 October 2021.

The Leiden Marathon is known for personal attention towards every runner, enthusiastic spectators and its fine atmosphere. It has the most beautiful course in The Netherlands, with the start and finish in the middle of the ancient city where Rembrandt was born and the Pilgrims lived for 12 years. The Marathon has been held annually in Leiden since 1991. For participants in the full marathon a time limit of six hours applies.

The Leiden Marathon was started by the Leiden Road Runners Club after some of its members travelled to New York for their first experience of a marathon. When they came back they decided to organise a marathon in their home town. The Leideners were so impressed by the atmosphere and organisation in New York that they took it as an example on which to model their own event. The team of 48 runners who went to New York came from 3M Netherlands, and was known as the 3M Marathon Team.

The Leiden Road Runners Club was set up as an independent club after the New York trip. They presented a plan for a local marathon to the management board of 3M. The plan was approved, and 3M sponsored the event for the next 10 years. When the city’s inhabitants and those of the surrounding municipalities enthusiastically embraced the very first Leiden Marathon held on 16 June 1991 it was clear that a wonderful sporting event had been born, which has since grown to become a mature marathon with international appeal.