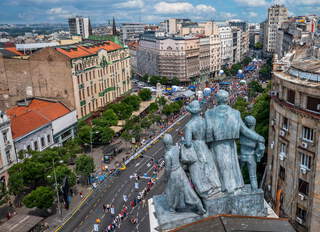 The Belgrade Marathon triumphed over adversity simply by being held this year.

Originally scheduled for 16 May it seemed touch and go as to whether covid restrictions would allow it to go ahead. In the end, after deliberation by the Government’s Crisis Management Office it suffered only a three-week delay.

The Crisis Management Team is responsible for Covid precautions – usually involving the imposition of restrictions. Three of the team attended the event and observed that because they look “with different eyes” there would always be challenges but that they were very satisfied with the conduct of the event.

There were 1000 runners in the Marathon and 4000 runners in the Half Marathon. “This was our limit,” explained race director Dejan Nikolic. “We set runners off in waves of 300–500 at 90-second intervals, maintaining 1.5m distancing. It went smoothly with no problems. There was never any place that became crowded. It was a lot of work for a lot less than normal – no fun run, no children’s race. Missing these supporting events also had financial impacts. But it was worth it. It seemed like life was back to normal – or at least the hope of it was. Ordinary people saw the Marathon as a strong message.”