Prague Marathon: Battle of the Teams 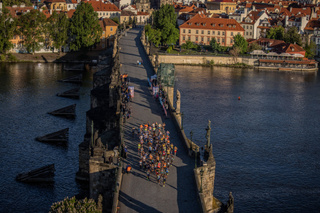 The inaugural edition of the ‘Battle of the Teams’ in Prague early on 30 May, started in glorious sunshine on the Charles Bridge.

Incorporated into the elite-only Prague Marathon, the competition produced fast racing, a team result in doubt till long after the individual winners had crossed the line and Tokyo Olympic qualifying times for two elite Czech women.

The Battle of the Teams involved four carefully balanced teams of eight athletes, but eventually there could be only one individual winner in the men’s and women’s races, and only one team could come out on top.

The Men’s race was won by Kenya’s Benson Kipruto with a surge over the final 5km. Earlier reluctance to push on didn’t result in fast times, but did provide a delicately balanced race with a result in doubt till the final stages.

In contrast Kenya’s Purity Rionoripo, after an already quick first half, applied pressure at the front of the women’s race at 25km, breaking loose and building an unassailable lead. As the last of the thirteen 3km laps unfolded, she pulled further and further clear, surging to the line in 2:20.14, with Ethiopia’s Guteni Shone taking second in 2:21.46.

Rionoripo’s win was the performance of the day, though her great run and points contribution to her Volkswagen team, could not stop rival Team Birell, from taking the team title. The scoring format, with six runners per team to count, saw times converted to points, but importantly ensured that the last finishers for each team, could change the team positions dramatically.

Eventually it was the two personal bests by team members, that ensured Team Birell’s comfortable winning margin, their squad’s times converting to 7,152 points, over Team Volkswagen’s 6,887. Team Mattoni were third with 6845, with Team Skupina CEZ on 6765.