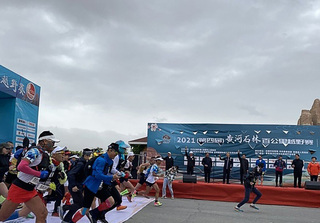 Extreme weather struck a high-altitude section (2000m-3000m) of a 100km race held in the scenic Yellow River Stone Forest in north-west Gansu province on 22 May, killing 21 of the 172 competitors in the cross-country mountain race.

Among the dead after hail, freezing rain and high winds had hit competitors between kilometres 21–30, were elite Chinese ultrarunners. It later emerged that six competitors had been saved from the deadly conditions by a local shepherd who had guided them to shelter.

The race, in its fourth successive edition, was staged by the Baiyin City government and the Chinese Athletic Association. The national authorities, in general very supportive of the health benefits of distance running, responded five days after the race by cancelling or postponing more than 60 marathons and cross-country races throughout the country. These include the Lanzhou International Marathon, an AIMS member race, which was due to be held in Gansu province on 13 June.

China’s top sporting body called upon organisers to improve the safety of their events.