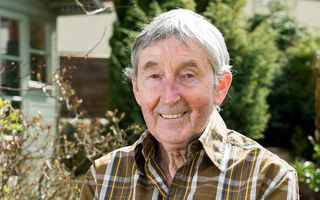 Ron Hill, a former European and Commonwealth Champion in the Marathon, died on 22 May 2021 aged 82.

Sometimes known as “Mr Marathon”, Ron held together a streak of running at least one mile every day which lasted for more than 52 years. He was not just a world record breaking marathon runner but a true innovator in a sport which had been bound by tradition for decades.

He was the second man to break 2:10 in the marathon. He set four world records at less-recognised distances but never laid claim to the marathon world record. He could have done so through his 2:09:28 win at the 1970 Commonwealth Games in Edinburgh as there was always serious doubt over the accuracy of the course in Antwerp on which Derek Clayton had recorded 2:08:33.4 the previous year.

While he was competing at the highest level, but at a time when there was no financial reward for performance, he graduated from the University of Manchester with a PhD in textile chemistry and pioneered production of specialist clothing for runners through his Ron Hill Sports company.

In common with many British distance runners of the time Hill started by running cross country in the winter and track in the summer. In 1963 he equalled the British record for six miles at the Amateur Athletic Association (AAA) championships with a time of 27:49.8.

Hill finished 12th in the 1966 European Championships Marathon in Budapest. On the UK domestic scene he dominated the 10-mile event by winning the AAA championships every year from 1965-1968 and in the 1968 race setting a world record of 47:02.2. That summer he finished seventh in the Marathon at the 1968 Mexico Olympics before again lowering the 10-mile world record to 46:44.

Hill won the 1969 European Championships Marathon on the classic but notoriously tough Marathon-to-Athens course. The following year he was at the peak of his powers with his sub-2:10 Commonwealth win preceded by victory in the 1970 Boston Marathon with a new course record of 2:10:30, an improvement of three minutes. In Edinburgh Hill passed through 10km in 29:24, a pace described as ‘suicidal’ (projected as 2:04 for the full distance).

On the strength of his Boston and Edinburgh wins Hill was ranked by Track & Field News as top marathoner in the world for 1970. The next year he was honoured with the Order of the British Empire for “services to athletics”. His final Olympics was at the 1972 Munich Games where he finished sixth in the marathon at the age of 33.

Hill had graduated with his PhD in 1970 and established his company. It started to put out a range of innovative new items of clothing that very quickly became adopted as standard requirements: “Freedom” shorts; the iconic string vest that he had worn in competition; waterproof running tops with reflective strips; and the enormously popular ‘Ron Hill tracksters’ which, along with Hely Hansen thermal tops, passed into the British running vernacular. Hill says he founded the company “because I was running to and from work in the dark in winter and wondered what I needed to stay safe.”

Sales at one point topped £6 million but Hill ran into financial difficulties in the early 1990s and sold out. He later founded another company, ‘Hilly Clothing’, which among other items specialises in technical socks.

Ron Hill started running when the conventional wisdom was that good nutrition consisted of a pre-race steak. Yet he developed the carbohydrate bleed-out and boost diet for Marathon runners to raise muscle glycogen levels in the week before the race. The popular legacy of his innovation survives in the pre-race pasta parties of today’s mass marathons.

According to Hill’s running logs he started training on consecutive days on 20 December 1964 and did not default on it until 30 January 2017, 52 years and 39 days later. He defined a run as covering at least one mile at any pace. His streak included post-operative workouts on crutches. By April 2014 he claimed to have run 159,106.5 miles. His ‘streak’ ended in 2017 with the announcement on his Facebook page that “Due to ill health Ron has decided to take a day off”.

He reached his goal of racing in 100 countries before his 70th birthday with races in Panama and the Faroe Islands. His final marathon was the centennial Boston Marathon in 1996. He completed 115 marathons and recorded 21 marathon victories.

In November 2019, in the 50th year since his European Championships victory, Ron Hill attended the Athens Marathon and the AIMS ‘Best Marathon Runner’ Gala as guest of honour and was moved to tears by the enthusiastic and sustained standing ovation he received.