Centenary of race celebrated in Pietermaritzburg 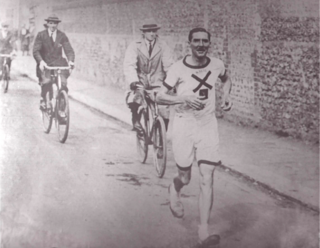 5-time Comrades Marathon winner, Arthur Newton in the original running kit that has been recreated for participants in the 1921 Comrades Tribute Run

The 1921 Comrades Tribute Run will take place on Monday, 24 May 2021, exactly 100 years to the day, as part of the Comrades Centenary Celebrations, preceding an exciting line up of Centenary festivities on the day.

Covering a distance of 2.2km, the Tribute Run will finish at Comrades House and will include the participation of former Comrades Marathon Winners, Quadruple Green Number male runners and Triple Green Number female athletes.

These 34 participants will be set off by Msunduzi Mayor, Cllr Mzimkhulu Thebolla at 09h00 outside the Pietermaritzburg City Hall and will proceed down Chief Albert Luthuli Street which becomes Alan Paton Road and then turn left into Connaught Road, covering the 2.2km long route.

CMA Race Director, Rowyn James said, “This is a symbolic race and is being run in honour of the very first Comrades Marathon that was held on 24 May 1921. We expect this race to finish by 09h30 and will precede an exciting line-up of items on the celebrations programme to mark our Comrades Centenary.”

James adds, “Thanks to CMA sponsor, Mr Price Sport, our 34 athletes will be outfitted in running kits which take us back all the way to the 1920’s. It promises to be quite a show. It is also noteworthy that this will be the largest gathering of former Comrades Winners since 1983 when a reunion was held of all 25 living winners at that time.”

The 1921 Comrades Marathon Tribute Run will be overseen by Msunduzi Traffic Management Services and the Department of Transport (RTI).

The arrival of the 34 runners at Comrades House will herald the start of the formal Comrades Centenary Celebrations which will include the unveiling of a Centenary Monument, entertainment, formal addresses from dignitaries, less-formal speeches by special guests, more entertainment, and the cutting of a giant birthday cake.

The occasion’s activities will be live-streamed, and we invite Comrades runners and supporters in South Africa and around the world to follow the day’s proceedings from 09h00 – 15h00 on our website www.comrades.com, or on Facebook @ComradesMarathon.