Fifth event in the city where east and west meet

Vladivostok on the up 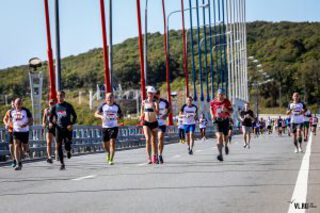 Until the beginning of the 1990s Vladivostok, with 600,000 inhabitants, was still a restricted military area.

This, the Galaxy Vladivostok Marathon is AIMS-certified and also offers a “half”, a 10- and 5-kilometre route as well as a family and children’s run over 1km. It will take place for the fifth time on 25 September 2021 after paying tribute to the corona pandemic in the previous year. The “inventor” of the easternmost Russian running event was the former Vice President of the Siberian Primorske region, Konstantin Bogdanenko.

During a visit to Europe he took part in the Trieste marathon and was enthusiastic about the flair and the organisation. When he returned, he said: “We can do that too!” Together with committed colleagues like Olga Gaeva and Polina Kupchick, they developed the first international marathon event in Vladivostok in 2017. There were 800 participants at the beginning, with the fourth edition receiving more than 4000 entries from 25 countries, mainly from Asia.

The attraction is the bridges. Running or walking over them is only possible on the day of the Vladivostok Marathon, otherwise these are strictly reserved for motorised traffic. Of course, many locals don’t miss this either. The “Russki” bridge, which leads to Russki Island, is the starting point for 42.195km and 21.097km. The “Solotoi”, the Russian “Golden Bridge”, is bridge no. 2, from which the runners have a unique view of the huge port city.

The running movement has developed enormously in the East Siberian area in recent years , not least because of the marathon attraction. Races have become commonplace every week, and thousands have decided to go jogging and walking. Even in winter there is running: 1000 and more take part in the traditional Vladivostok Arctic Marathon.

We’re celebrating a small anniversary this September,” happily Olga Gaeva and Polina Kupchik , both involved in the organisation team. Olga was even appointed race director, while Polina is responsible for public relations and international contacts.

They think it is important to encourage regular running and thus a healthy lifestyle for the Siberians before and after the “marathon of bridges” . “We also focus on families,” says Polina. We have family and children’s races, 1 kilometer for ‘little heroes’. "

The marathon event offers still water, bananas and dates every 5 km . Anyone who gives up will be picked up in a special car. A special transfer brings all participants to the respective starting point. Changing and storing personal clothes are organised. Everyone receives a special t-shirt and a finisher medal. There are freebies and a “beginners package” with surprises. The day after the marathon sponsored by Samsung Galaxy, the traditional Siberian Tiger Day will be celebrated in the historic centre of Vladivostok.

The Vladivostok Marathon, still almost unknown to us, is developing into a Far Eastern attraction. It will soon be followed by a tiger marathon, says the inventor of the bridge marathon, Konstantin Bogdanenko. North of Vladivostok, where the taiga (sub-arctic forest) begins.

Anyone interested in one of the vacant spots on a runner’s trip to Irkutsk, Lake Baikal, Trans-Siberian Railway, Vladivostok Marathon and three-day taiga tour can contact: Christel Schemel via christel.schemel@gmail.com .