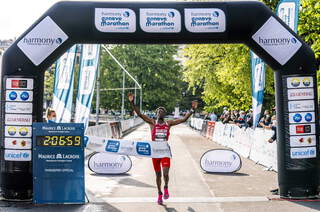 The world’s running elite delivered a series of exceptional performances this Sunday in Geneva at the Harmony Geneva Marathon for Unicef.

Henry Wanyoike, the triple Paralympic champion in the 5,000m and 10,000m and World Record Holder in the blind marathon, qualifies for the Paralympic Games in Tokyo.

In light of the ever evolving pandemic situation in the world, the Harmony Geneva Marathon for Unicef organising committee is proud to have hosted the 16th edition of the race. Offering elite athletes the chance to compete – and achieve their goals – in a secure environment.

It wasn’t until last Thursday that the organisers revealed the exceptional elite line-up for this unprecedented 16th edition. The global running community were able to follow a livestream online, whilst the fight for victory took place behind closed doors.

Toeing the start line at 7am under the watchful eye of Geneva’s Jet d’Eau, both the elite men and women rose to the occasion, setting new fastest times on Swiss soil on a flat course on the shores of the lake. Triple Paralympic champion Henry Wanyoike and his guide rounded off an incredible morning of racing by confirming their qualification for the Tokyo games.

The men’s race was won by the Bahraini runner Shumi Dechasa – who set the new fastest time on Swiss soil (and broke the event record by nearly three minutes in the process), crossing the line in a lightning fast 2:06:59.

In the women’s field, the performances were just as impressive with Kenyan Maureen Chepkemoi also setting the fastest time on Swiss soil in 2:24:19. In doing so, she also set a new women’s record for the Harmony Geneva Marathon for Unicef. (the previous record was 2:29:11).

Led by the pace setters at a speed of 20km/h for the first 30 kilometres, the frontrunners ran together for most of the race. Gradually, the runners dropped off the back of the group one after the other leaving just four runners to fight for the victory. It all came down to the last lap when Barheini, Shumi Dechasa ran off the front to take the win. He had already competed in Geneva in 2019, finishing in second place. In addition to breaking records with a memorable time of 2h06’59, he also took his first victory in Switzerland. Second over the line was the, Kenyan, Kennedy Cheboror in 2:07:42, then the Ethiopian Fikire Workneh rounded out the podium with a time of 2:07:58.

On the women’s side, the race was also very tight, notably between the two Kenyans Maureen Chepkemoi (2:24:19), Lucy Karimi (2:24:24) and the Ethiopian Tigist Memuye (2:24:23). They ran together from the start to the finish, with the result only decided in the final straight. The youngest of the three, Maureen Chepkemoi (KEN) won a memorable sprint to the line.

Henry Wanyoike (KEN), triple Paralympic Champion in Sydney and Athens and World Record Holder in the blind marathon with a time of 2 hours 31 minutes 31 seconds, has achieved a tremendous feat at the age of 46 by securing his selection for the Tokyo Paralympic Games. "I am very happy to be able to participate for the first time in the Harmony Geneva Marathon for Unicef, which is very important to me, as an ambassador for Light for the World and thus qualify for the Paralympic Games in Tokyo. Especially in this time of pandemic, an event like this sends out strong positive signals and represents hope and optimism.”

Benjamin Chandelier, Event Director said: “Despite this particular context, an historic edition for professional athletes has just taken place and we will remember it with a smile. The elite race will now give way to the open races over the rest of the month and I wish all the participants good luck. On behalf of the entire organisation, I congratulate each runner for their performance and all the running enthusiasts who followed the athle.ch livestream sponsored by our partner Generali. This event could not take place without the commitment of our volunteers. I would also like to thank the authorities and the administration of the Canton and the City of Geneva for their unfailing support as well as our loyal partners for their support.”

Beyond the elite race, the Harmony Geneva Marathon for Unicef has opened its popularchallenge with an adapted version which is open to all until Sunday 30th May.Participants start from the Jardin Anglais, individually, to take one of the six challenges: Marathon, Half-Marathon, 10km Run, 10km Walking, 10km Nordic Walking and 5km La Genevoise #LikeAGirl by Always, which this year is also open to men. All challenges are open to wheelchair athletes. Each individual challenge can be run on Thursdays, Fridays, Saturdays and Sundays in May, at the times set by the organisation and in compliance with the health regulations in force on the day of the event.