Interview with founder of Cairo Runners 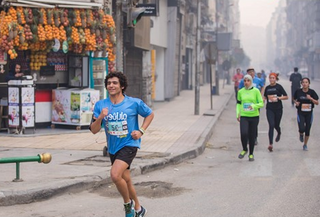 Who could have imagined it three decades ago? After the 1st Egyptian Marathon in 1994 the media all over Egypt had to explain the word “marathon” to their readers and listeners again and again.

But then the running movement in the land on the Nile became unstoppable:

The Luxor races have been joined by races through the desert in 20 years, in Sinai on Mount Moses, in Sharm El Sheikh and in the Egyptian spa town of El Gouna on the Red Sea.

In December 2012, the successful sales manager Ibrahim Safwat said goodbye to Bosch in Cairo. and devoted himself to a dream. He founded the “Cairo Runners” with friends. This marked the beginning of a new era of running in Egypt that is deeply impressive.

CS: How did you come to the decision to found a running club in Cairo?
Ibrahim: The idea was that we wanted to bring something new to the streets of our capital. The “Egyptian Spring” took place a year earlier, and we too got something from this wind. Many young people were given a boost and courage to try something new. So many bold plans arose. I met friends and shared my thoughts that we could start a running group to jog through the streets of Cairo together.

CS: Was this rational, with all the traffic in the 21 million city?
Ibrahim: My friends were skeptical at first, because walking in Cairo is almost impossible. And we also wanted to attract women to run. That was and still is something unusual for us. We initiated a model. From now on we wanted to meet every Friday morning, because Friday is the day off of the week in Egypt. The start should always be at 07.00 because there are few cars at this time of day. We selected appropriate places and streets for the first Friday runs. It began with 4km in the Zamalek district, near the banks of the Nile. Zamalek thus became the cradle of our running history. Then we extended the distance by 1km from Friday to Friday. Soon the ten of us ran in a row and gradually learned to run a half marathon. After half a year we had achieved our goal. The group had grown to more than 1300 half marathon runners, including many women.

CS: How did it go then?
Ibrahim: To avoid boredom we changed the training locations. In this way participants were able to get to know their huge city, discover sights and make friends at the same time. We always announced the routes and the starting points in good time by mobile phone. Our meetings thus remained very lively and interesting for everyone. After a year we saw our basic idea as fulfilled.

CS: So you wanted to quit after a year?
Ibrahim: The project was only intended for a year. Everyone had their job, their studies, their own life. We were good friends and relatives and thought that such a project can only be carried out on a voluntary basis for one year. But over the course of the year we also learned that the runners had identified themselves very much with the new idea. For many it became a passion that they never let go. Even sponsors made friends with our idea. So we went on and learned from time to time. Today we know a lot about running event management and caring for runners.

CS: How is the situation at the Cairo Runners today?
Ibrahim: We now run an office with eight employees. When we organised our first Cairo marathon in April 2019, we had more than 600 volunteers and 60 employees for the organization office. The response was enormous. Despite Corona, the running meetings continued to take place every Friday. 40-50 voluntary helpers were essential for this, as hundreds came to training on Fridays and there are now 2,500 and more running fans.

CS: Which routes do you offer, how are running women viewed in Cairo?
Ibrahim: Our running movement includes around 65% men and 35% women. Most are between 18–39, but there are also runners over 70 years of age. Families come with their children, which we are very happy about. We offer routes of 2 km, 5 km and 10 km. We also organise half marathons and marathons. People with disabilities also have the opportunity to be actively involved. The women are fully integrated. You run with us within the group. If they are molested, our men talk to such a person. Then we continue walking with the women. The training group always stays together. So our running women always feel protected.

CS: Where have the Cairo Runners run in their history so far?
Ibrahim: We run in all districts of Cairo. Our philosophy remains that all participants should get to know their city from the perspective of a runner. But we also leave Cairo every now and then for training runs and competitions in Luxor, Aswan, Alexandria, in El Gouna on the Red Sea or in the beautiful Sinai. Our Cairo half marathon with its 7000 participants was one of the largest running sports events in Egypt. On that day we also held a 7km run and a 1km fun run for families. With it, many people enjoyed the sport on the one day. We also love spectacular events such as treasure hunt runs, obstacle runs and training camps. The Cairo Marathon through the old town two years ago was the most beautiful run in our history with 3000 participants. We are so proud of it. Everyone walked happily through historic Cairo along the Nile. A dream run!

CS: We already imagine being part of the Cairo Marathon in October 2022…
Ibrahim: You are cordially invited. Maybe we will take you on an Egypt running tour with stops, Cairo and El Gouna and culture in Luxor and Alexandria! Let’s stay in contact.

Further information in the new illustrated book “Laufen in Ägypten” by Klaus Weidt / Christel Schemel, can be ordered for 15 EUR through German Road Races