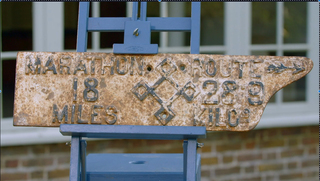 On an episode of the BBC series Antiques Roadshow, aired from Enfield in London on 16 March, a 113-year old cast iron fingerpost sign was brought for valuation.

It was the “18 miles” sign from the 1908 London Olympic Marathon run from Windsor Castle to White City Stadium in west London. The sign was in fact placed 8.2 miles into the course, at 18 miles to go and bears the ‘5-diamond’ emblem of Polytechnic Harriers, the club given the task of organising the race. Such signs were used for the entire length of the course but the only one previously known to be still in existence was the “25 miles” [to go] sign at Eton Bridge (see picture).

It is not clear where the 18 miles sign might have been fixed as the bridge where it would have been located was rebuilt during WWII.

The length of this particular race, signposted in both miles and ‘kilos’, eventually became fixed as the Marathon standard of 26 miles 385 yards or 42.195 kilometres. Before then marathons had usually been approximately 25 miles (40km) but could vary considerably in length. The significance of this race was due to the dramatic finale played out on the track inside the stadium.

The Italian leader, Dorando Pietri, collapsed repeatedly and was ‘assisted’ to his feet by race referee Jack Andrew before a last dash to the finish line. He got there 32 seconds before the American, Johnny Hayes, but the Americans protested and Hayes was awarded the victory. Public sympathy was with Pietro and Queen Alexandra, who had witnessed Pietri’s desperate last-lap struggle, awarded him a special commemorative cup.

The race stoked a marathon frenzy and ‘re-runs’ attracted huge betting interest. Pietri and Hayes met up in many different locations in the following years, both indoors and outside, where the only constant was the distance they had to run. In 1924 the world governing body, the IAAF, formalised the Marathon distance as that run from Windsor to White City in the 1908 Olympic Marathon.