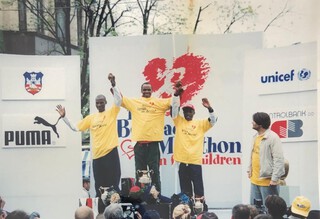 Football rivalries – especially those between clubs from the same city – usually generate feelings ranging from rivalry to hostility. Marathons, on the other hand, are especially helpful in cultivating feelings of solidarity.

In Belgrade, where rivalry between the clubs Red Star and Partizan is acute, it has been solidarity which has won people over.

For the third time, Belgrade Marathon has secured the participation of both clubs in a sale of the jerseys worn in the local 164th “eternal” derby match on 7 April to raise funds for charity. From match day until the 34th Belgrade Marathon race day on 16 May the shirts’ sale will raise funds for improving conditions for people with disability so that they are better able to participate in sports and recreation activities.

This initiative of the Belgrade Marathon, with the support of the management and players of Red Star and Partizan as well as the Association of Football Clubs of the Super League, is to raise awareness of the challenges faced by people with disability on a daily basis. Under the slogan “Without Barriers” the intention is to create conditions for removing the mental and physical barriers for people with disability so that they are included in everyday life as effectively as possible. Partners in this project also include the Belgrade Sports Association of People with Disabilities and the Serbian Philanthropic Forum.