From the Košice Marathon archive 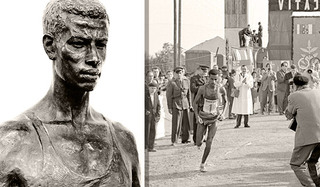 1961 ranks among the most memorable years in the rich history of the Košice Marathon, thanks to the participation of the Olympic champion Abebe Bikila.

Bikila is considered by many to be the best marathoner of all time but he only began training seriously at the age of 24. Despite the late start he still achieved twelve victories, two of which were in the Olympic Games.

After winning the first of them in Rome in 1960, running barefoot, the world wanted to see him in other races. In the year following his Olympic triumph, he ran in Athens, Osaka and finally in Košice, where marathon enthusiasts were dying of curiosity. He won everywhere he went and recorded his best time of the season in this small town in eastern Slovakia. This was certainly helped by strong competition from athletes from four continents that came to the race.

Bikila had trained diligently. He attacked Sergei Popov’s course record but after 25km became thwarted by the warm weather. Some 30,000 spectators were waiting at the stadium and tens of thousands of others created corridors along the city streets. The crowd ‘escorted’ 88 runners to the finish line, among them the best runner from Košice itself, Tibor Biskup, who finished 22nd.

The strict amateur rules of the time did not permit Bikila to be paid any financial reward, so he was at least pleased with the local brand running shoes he received from František “Buben” Kapcár, still living today and now 98 years old. And perhaps this champion was able be enjoy something aside from the victory that day: the warm reception and the memories, which remained in this city in the form of a bronze bust made by Arpád Račko, the celebrated artist behind another iconic work: the statue of the marathon runner.

Bikila later enjoyed his second Olympic triumph in Tokyo in 1964. He died as a result of a car accident in 1973.