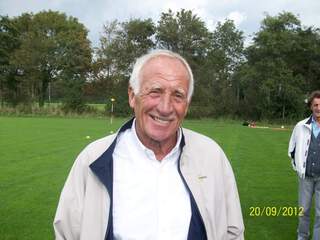 He played leading roles in major running events such as the City- Pier-City [half marathon] and the Enschede Marathon which both became members of AIMS. Working with the Twente authorities he brought the 11th World Congress of AIMS to Enschede in June 1997.

“Wim started to get involved with running when the ultrarunner Jan Knippenberg asked him to coach him. I lived in the next village to Wim and rode my bike to his house in Hoek van Holland to asked him to help coach me at the beginning of my running career. We started a relationship, as a coach and as a friend, that lasted until his passing.

“He became my mentor and he taught me always to think out of the box. His passion and creativity were key drivers. More and more he became involved with other runners on all levels including well known singers, politicians, captains of industry and members of our Royal Family. While he was national coach he guided Gerard Nijboer to the European title in Athens in 1982.

“He was a visionary and quickly saw the potential of women’s running, running tourism and coaching platforms to grow the sport.

“His main passion was travelling the world bringing runners to events and expanding his unbelievable network. He had this great ability and the character to open doors everywhere. He received a royal decoration for his great contribution in promoting running in the Netherlands.”

Wim Verhoorn visited the “AIMS Marathon Museum of Running” in Berlin (now ‘Marathoneum’) several times, always arriving with luggage from his numerous trips to running events all over the world. He brought back souvenirs of all kinds which he donated as exhibits for the museum.