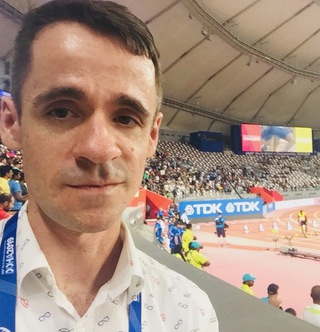 AIMS Distance Running magazine and aims-worldrunning.org has reached an editorial relationship with Brett Larner, the founder and editor of Japan Running News.

Japan Running News is the world’s only website (www.japanrunningnews.blogspot.com) focusing on English-language news and information about the Japanese long-distance running scene. Larner himself is also a World Athletics-authorised Athletes’ Representative and has lived in Tokyo since 1997. He has written features for print magazines worldwide including Runner’s World and Running Times as well as for websites such as Podium Runner and World Athletics. Larner has been the announcer for the Tokyo Marathon’s official worldwide live television broadcast for the last five years and a commentator on the Gold Coast Marathon’s live webcast since 2014.

The JRN site had 1.5million+ views in the 2020 calendar year. The Twitter feed @JRNHeadlines has 12.6K followers, with 2.9K on the secondary feed @JRNLive, used for live race commentary. Postings on the site are regularly linked by most of the world’s leading websites and publications.

Japan has long held huge importance both for the sport of long-distance running in general and for AIMS in particular. Hiroaki Chosa was President of AIMS for 20 years and cultivated the support of Japanese sponsors. In 2020 there were 25 Japanese member races of AIMS. The relationship has now been enhanced through this partnership with Japan Running News.