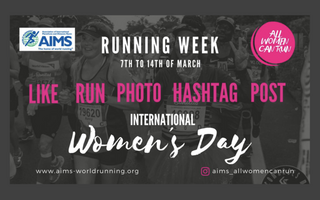 Charlotte Brookes, National Event Director of the Canada Running Series . With 15 years of event experience, Charlotte directs the planning and production of seven runs in four cities for 70,000 participants annually, including the World Athletics Gold Label Scotiabank Toronto Waterfront Marathon. In 2017 Charlotte received an Industry Leader Under-40 Award from the National Center for Spectator Sports, Safety and Security along with 10 other major events in the city of Toronto.

Paz Beccar Varela, from Argentina, works as a TV producer for the Pegsa Group. She is a runner, specialist in marketing and communication for various sports brands, and producer of ESPN RUN Latinoamerica. In this role she was involved in the production and broadcasting of the Maraton Internacional de Mar de Plata (2016-2017) and the Maraton de Buenos Aires (2018 -2019).

Li Xiang replaces Shirley Yang, who has changed jobs to work in another division of the Chinese Athletics Federation. Li works as the manager of the CAA’s social activation department (including street runs). She was born in China and studied Hotel Management at Beijing University. Li is responsible for the organisation and marketing of the marathon movement in China.

Lacie Flannery, (USA) is President of Veteran Race Management. She is responsible for all aspects of event organization and corporate development. The company works with the Bank of America Chicago Marathon: Lacie has over 15 years of experience in the running industry, specialising in women’s running. She graduated from Northwestern University, BSJ in Evanston, Illinois.

Founding members of the AIMS Women’s Commission are:

The AIMS Women’s Commission was created to support Goal 5 of the United Nation’s 2030 Agenda for Sustainable Development: Achieve gender equality and empower all women and girls.

AIMS Women’s Commission aims to increase women’s participation in running events around the world by creating the largest international running network built by women. It’s a special place for women to enjoy running and be inspired by it, a network just for women.

“ALL WOMEN CAN RUN” anywhere in the world.

AIMS races are advertised through this network not only as endurance races, but also as the best venues to run a race with with the aim of increasing the participation of women in endurance races.
We invite every woman in the world to start running and share their experiences using our
hashtag #ALLWOMENCANRUN.