Timeline of black running history in US 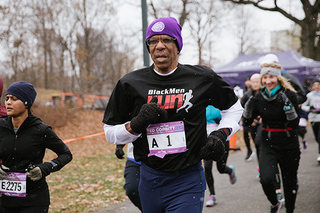 Ted Corbitt laid the basis for measurement of road running courses in the USA and was the founding president of NYRR (New York Road Runners. He was black; and many assume he was the first black American endurance runner of historic importance.

Corbitt (1919–2007) was a formidable figure in long-distance running, but he was far from the first – or the only – notable African American long-distance runner. The history of black running in America dates back to at least the 1870s and is both rich and profound.

Gary Corbitt, Ted’s son, has spent years researching and writing about black American running and bringing many untold stories to life. He founded the Ted Corbitt Archive to preserve and highlight some of the amazing and almost forgotten stories of black American runners, coaches, clubs, teams, events, supporters and leaders.

“My dad always told me he wasn’t alone – that there were other great black American long-distance runners,” says Gary. “I didn’t know how rich the story was until I started looking into it myself.”

He was inspired by a story his father told him about a letter he received from a young black runner. “The runner wrote that he wished he had known about my dad when he was in school and the coaches steered him away from long-distance running and into sprints,” said Gary. “If he’d had a black long-distance runner like my father as a role model, things might have turned out differently. I want today’s young black runners to know that they are part of a rich history and that they have many role models.”

Here are just a few of the highlights from the Chronicle. See tedcorbitt.com for more.

In the late 1870s the most popular sport in the United States – and a few other countries – was pedestrianism: multi-day running and walking competitions over hundreds of miles, often on covered lanes in front of large crowds. Participants came from all walks of life and one of the most successful was a young black runner named Frank Hart (above, left). Born Fred Hichborn in Haiti in 1858 he moved to Boston as a teenager, worked as a grocer, and started running long distance runs to make extra money. He changed his name when he became a professional “walker” (pedestrian).

Hart won the prestigious O’Leary Belt Six Days at Madison Square Garden in 1880 completing an astonishing 565 miles – a world record. The runner-up, William Pegram, was also black. Hart’s success earned him fame and fortune; his image was featured on trading cards (the forerunner of baseball cards) nationwide, and he likely made over USD 100,000 in his lifetime thanks to the legal gambling that was at the heart of the sport and even allowed participants to wager on themselves.

Unfortunately Hart also endured racism, including heckling and physical harassment from viewers and snubs and slurs from his rivals. In the late 1880s baseball – with its rigid racial segregation policy – ousted walking in popularity. As an excellent all-round athlete, Hart joined a “Negro League Team” for a few years.

The spirit of the march (pedestrian) era inspired Ted Corbitt, who ran (and won) many ultra runs, completing 68.9 miles in 24 hours at the age of 82. “My father talked about running 600 miles in six days and walking 100 miles in 24 hours,” said Gary. “These were milestones from the marchers’ days, the meaning of which I only fully understood much later, after his death.”

Several black running clubs in NYC in the early 1900s, including the Salem Crescent Athletic Club, St. Christopher’s Club of NY, and the Smart Set Athletic Club of Brooklyn, showcased the talents of a generation of black runners at sprint to marathon distances.

The New York Pioneer Club, which was founded in Harlem in 1936 by trainer Joe Yancey and two other black men, campaigned to give everyone interested and qualified regardless of race a chance. “It was an integrated running team that preceded the integration of professional sport,” says Gary Corbitt. Ted Corbitt joined the Pioneer Club in 1947 and in 1958 he and other members formed the core of the New York Road Runners.

Opportunities for female long-distance runners were few before the early 1970s. NYRR always allowed women as members and in its events, but the Boston Marathon excluded women until 1972, the same year that a women’s 1500m (less than a mile) run was added to the Olympic programme.

This article, authored by Gordon Bakoulis, originally appeared on NYRR.org , the website of New York Road Runners, and is republished with permission. Photo: Gary Corbitt (with permission, NYRR)