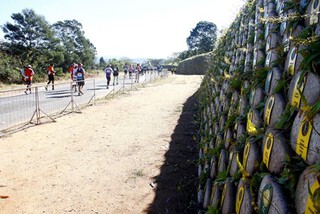 Organisers of the Comrades Marathon created a “Wall of Honour” back in 1993 as a permanent landmark to commemorate the achievements of the Comrades runners who covered the epic distance between Durban and Pietermaritzburg.

Building the Wall began in 1993 with plaques being available for purchase since 1994. It is constructed from interlocking blocks such as those commonly used for retaining walls. Runners who have successfully completed the Comrades Marathon can acquire their own building blocks to last forever. These are mounted on an attractive badge, which records the name, start number and personal status of the runner, which can be updated in later years.

The plaques are bought by runners, family members or friends on their behalf in order to give them away on special birthdays, anniversaries, Comrades milestones or other occasions. The Wall of Honour memorial pads cost ZAR 550 (EUR 30) per pad. This includes the block, the plaque and the engraving as well as the maintenance and care of the block and the site for posterity.

The wall is situated close to the halfway mark on the Comrades route, just outside Drummond. On a down run it would be on the left as you make your way through the valley of a Thousand Hills.

The stretch of road beside which the Wall of Honour is located is on the municipal boundary alongside PheZulu Game Private Park and has the potential to be extended for many years to come. It forms a retaining wall which now stretches over 200m long. Covered with green and yellow Comrades plaques there are now over 6000 of them, belonging runners who have successfully completed the Comrades at least once. They have placed their names on this wall to commemorate their race achievements. Runners who have earned their Permanent number (run Comrades more than 10 times) have a green plaque while those who have run less than 10 have a yellow plaque.

The first section of the wall is set aside and contains the plaques of former Comrades winners. The Comrades Marathon Association awards these to the winners starting from the first race winner, Bill Rowan, in 1921. On average about 500 runners a year are added to the Wall of Honour. Our virtual events don’t qualify for addition to the Wall.