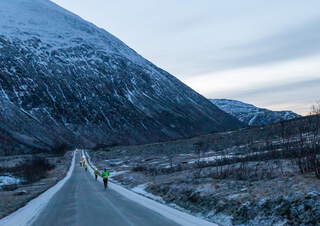 The PolarNight Halfmarathon in Tromsø has been organised every year since 2004 and incorporated distances at 5km, 10km and half marathon. In 2021 the race also included a marathon distance, called the Ishavskraft Marathon.

In Tromsø (350km north of the Arctic Circle) we started the year as usual with the PolarNight Halfmarathon. We usually get 2000 runners from all over the world, which makes it Norway’s biggest winter race. This year’s race on 9 January was special in many ways. Usually anything from a winter wonderland and white puffy snow to icy wind, rain and a slippery surface can present itself. This year there were no snow-covered streets but bare asphalt and a colourful sky. The surrounding arctic scenery provides a spectacular frame and mood for the race. The Northern Lights could be seen in the evenings before and on race day.

While the usual races (half marathon, 10K and 5K) take place in the urban areas of Tromsø, the Ishavskraft Marathon took runners to the secluded outer coastline, where the darkness and the cold and potentially severe climate makes everything much harder. All participants had to have previously run a marathon within four hours. This first edition had a maximum of 50 brave souls who fought their way against wind and darkness to the city centre of Tromsø. Magnus Warvik was the first to cross the finish line, in 2:48:05. The first woman was Una Bratlie (3:28:12).

The –7ºC and icy 10m/s wind in your face made the PolarNight Halfmarathon far from easy but the bare asphalt brought new records: 4 of them in the half marathon and 10km. Sebastian Conrad Håkansson (1:08:27) and Stian Dahl Sommerseth (1:09:30) crushed the existing half marathon record while Yngvild Kaspersen set a new women’s record of 1:18:43. Erik Lomås ran a new record of 31:31 in the Mørketidsmila (10km).

The ongoing pandemic demanded extraordinary organisation to ensure the safety of participants and volunteers. The field was reduced to around 700, mostly Norwegians and a few foreign runners who work in Norway. Every second of the race was planned to accord with the Covid-19 infection control rules. A maximum of 200 participants per distance was allowed with 25 starting together in small groups. We also extended the timeframe to nine hours instead of the usual four and recruited additional staff to ensure infection control measures and distancing between participants. The supportive onlookers for which our race is famous were banned from the arena in this year’s race. We have to thank all our participants and volunteers who showed an extraordinary discipline and kept distance at all times.

Excited runners gave us positive feedback: that they felt completely safe and enjoyed the break from the tough times we are experiencing right now. The race was not organised for profit but for the love of running and competing. Our aim was to provide a safe event for everyone. It was a positive start in the new year that gives us hope and energy for 2021.