Winner Zabala would go on to break Olympic record

90 years ago in Košice 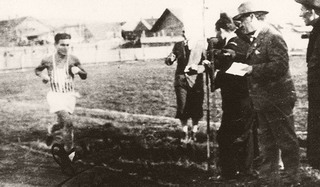 On the afternoon of Wednesday 28 October 1931 the starter’s gun sounded out in Košice as the runners set off in the 8th edition of the race, which at that time was called the Slovak International Marathon.

No one knew that it would turn out to be one of the most memorable years in the race’s history, thanks to Juan Carlos Zabala, a young Argentinian barely 20 years old. His participation had been arranged in a Vienna hotel by Zabala’s Austrian coach (with Czech roots) Alexander Stirling and Vojtech Bukovský, the founder of the Košice marathon.

Clearly convinced by Zabala’s world record in the 30km run in Vienna on 10 October, Bukovský urged the South American to start in Kosice and did well to convince him. Not only had Zabala never run a marathon before but the cold, inclement weather made him shake like a leaf before the start. The temperature never reached even 6ºC that day. But Zabala surprised everyone. He settled into a fast pace, shed his opponent and knocked nearly 10 minutes off the course record with a time of 2:33:19 – a record that endured for 19 years until the victory of the Swede Leandersson in 1950.

Doubters called on the organisers to learn to keep time better. Zabala shut them up himself when he won the gold medal in Los Angeles the following August in a new Olympic record of 2:31:36.

It was said to have been so foggy that the referees in places wondered whether Zabala had got lost, as they could not believe that he could run so fast. Hurrying from the course to the finish line, they reached him by car perhaps 200m before the finishing tape. Zabala’s stay in Košice, where he tried to break the world record in the one-hour run in a hastily organised race on 8 November, testifies to a calmer pace of life in those times. He didn’t manage it but he remained permanently in the hearts of the people of Košice.