Short of record by 12 seconds 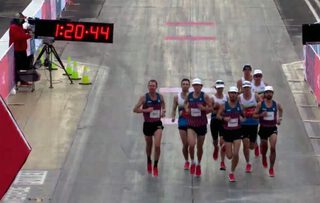 With temperatures around 15°C and an unusually high dew point of 7°C, conditions for an endurance event were again very good, apart from a refreshing wind in the Arizona desert. On a 11.11km-long circuit in the south of Phoenix where the “Marathon Project” was run in December 2020, the top group of men was on world record pace from the start. Together with four pacemakers, some of whom supported the leaders as far as 50km, a lead group of five included the favourite Walmsley, who set this record two years ago in the first edition of this event.

The (first) marathon was completed in about 2:34 and the half-distance reached after 3:04:14 when the last remaining pacer withdrew. Shortly afterwards Walmsley broke away from his two remaining fellow compatriots Craig Hunt (USA) and Hayden Hawks (USA). In a moment of high drama Walmsley cut his left shoulder on a screw protruding from a fence while lapping some women and began to bleed profusely. However, he managed to largely stop the bleeding and continue the race. At 60 km Walmsley was still on course for the record, 10 seconds ahead of Hunt and 90 seconds ahead of Hawks. His 75 km split of 4:35:05 projected to a finish time of 6:06:47 and his lead over Hunt had grown to over 5 minutes. Walmsley was still on for a record with a time of 6:08:04 at 90km. Then another, perhaps decisive, mishap occurred when the 95km split was called as 5:49:54, 25 seconds less than it should have been. He had to cover the last 5km in 18:50 and in the end he lacked the strength to do so. On the long home straight the clock ticked down relentlessly and passed the existing record time just 12 seconds before Walmsley crossed the line.

Walmsley pulverised Max King’s 2014 national record of 6:27:43. At the US Olympic Marathon Trials in February 2020 Walmsley had run his first serious marathon in 2:15:05.

In an eventful women’s race Audrey Tanguy (FRA) worked her way through the entire field and ultimately won in 7:40:36. Second place went to Nicole Monette (GBR) in 7:43:18.