Running to honour the founder of the Bangladeshi nation 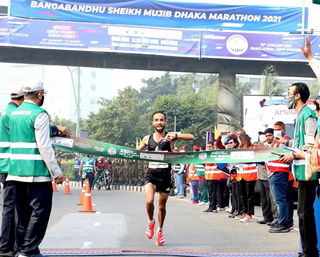 The race also aims to promote a health among Bangladesh citizens, as well as to involve the country’s youth in promoting sports and a healthy lifestyle.

The event was held as part of the 100th Anniversary Celebration and organised by the Bangladesh Army, in partnership with the Army Sports Control Board, Sports Vision Ltd, and Trust Innovation Ltd along with technical partner the Bangladesh Athletics Federation and the Bangladesh Olympic Association.

The races were held in Dhaka on 10 January at 06:30, starting from the Army Stadium and finishing in Hatirjheel..Both Marathon and Half Marathon distances were contested by approximately 100 runners including elite athletes from home and abroad. Runners from all over the world are offered the opportunity to access the event through the official digital marathon app where participants can register through the website dhakamarathon.com.bd , and take part in this historical event at any time from 10 January until 7 March.