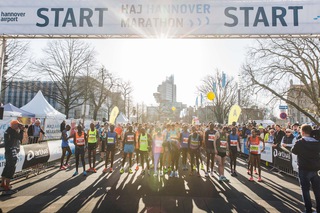 Lower Saxony’s largest running spectacle, planned for 17–18 April, will fall victim to the current pandemic situation, as it did last year. The next HAJ Hannover Marathon will be held on 3 April 2022.

“We planned a number of scenarios and possibilities to implement a responsible marathon in an adapted form,” explained organiser Stefanie Eichel. “But the current infection situation makes this absolutely impossible.”

A final decision has not yet been made on a possible elite-only race over the marathon distance for the German Marathon Championships, which were planned for April in Hannover. “We are currently in talks with the German Athletics Association and our athlete manager Christoph Kopp to give the athletes a chance to qualify for the Olympic Games in Tokyo,” said Eichel.

In the previous year, almost 30,000 active participants had already registered for the various competitions as part of the 30th HAJ Hanover Marathon, which will now have to celebrate its milestone event next year.

But there is still a small glimmer of hope for autumn: “If a running event with a good number of participants can be implemented responsibly, we will hopefully be able to give the starting signal for a really nice new running experience,” promises Eichel. “The plans for this are already on the table.”