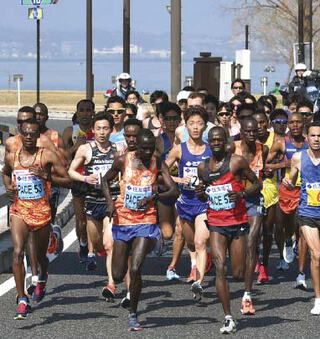 The Lake Biwa Mainichi Marathon will be discontinued after next year's 76th edition on 28 February 2021.

One of Japan’s three major men’s marathons, Lake Biwa’s position on the calendar as the last chance to qualify for Olympic and World Championships teams meant it has had a long history of being the place where Japan’s best marathoners earned to right to compete against the best in the world. But in recent years Lake Biwa has come under increasing pressure from the rise of the Tokyo Marathon where national records and other fast times have been run almost every year. Lake Biwa’s relevance and value began to be called into question. The Osaka Marathon is likely to replace Lake Biwa as a national team selection race in the future.

Founded in 1946 Lake Biwa is the oldest existing marathon in Japan. Along with the Fukuoka International Marathon and the Tokyo Marathon it is counted as one of Japan’s three top men’s marathons. But now its long, colourful history will come to an end next year when Olympic marathon trials winner Shogo Nakamura and others stand on its starting line one final time.

Starting and finishing on the track at Ojiyama Field, Lake Biwa has long been the final selection race for Olympic and World Championships teams. At both the 2012 London Olympics and 2016 Rio de Janeiro Olympics two of the three men’s team members earned their places at Lake Biwa. At both the 1964 and 1968 Olympics all three members were chosen there. Its position on the calendar relative to Fukuoka and Tokyo meant the battles were always furious, and those who emerged victorious went on to take on the world.

There’s no question that Lake Biwa has been the site of countless classic races and a vital part of Japan’s marathon tradition, but in recent years its relevance has faded. One of the major factors in this was the Tokyo Marathon’s change to a faster course in 2017. In 2018 Yuta Shitara broke the Japanese national record in Tokyo, and two years later Suguru Osako followed Shitara’s lead and did the same. With that record of success Tokyo has become the first choice for Japanese men targeting fast times.

The outcome of that change for Lake Biwa, an elite-only marathon, was that the athletes who could have provided the fireworks started staying away. With the Tokyo Marathon having moved to Lake Biwa’s traditional date the first Sunday in March two years ago, Lake Biwa’s shift a week later meant it was now the same day as the Nagoya Women’s Marathon, putting it even further into the shadows. The race’s viability, financial and otherwise, came into question.

According to those involved, the Osaka Marathon is the most likely candidate to replace Lake Biwa as a national team selection event. With 35,000 people running on a downtown urban course it is the second-largest marathon in Japan after Tokyo. With that kind of modern prestige to it, Osaka is highly likely to pick up the selection race label.

Modernity has a way of burying history. The MGC Race, a one-shot selection race for the Tokyo Olympics, was a major success. Those in power are leaning toward using the same kind of single trials race for the 2024 Paris Olympics. With the coronavirus crisis an ongoing issue, this is a period of transition. The Japanese marathon world isn’t immune to those transitional forces, and we can only hope that its reorganisation and reformation produce even more exciting races.

Translator’s note: Lake Biwa was Japan’s first World Athletics gold label race. For high-level amateur men its sub-2:30 qualifying time was a major goal and mark of prestige. Fukuoka and Tokyo both have faster elite field qualifying times, but both have secondary marks that make it possible for slower people to run. Lake Biwa was sub-2:30, do or die.

Its position after ekiden season made it one of the leading options for marathoners shooting for national teams. A change to the Osaka Marathon, a month before the New Year Ekiden, will amplify the same problems faced by the Fukuoka International Marathon, which has looked at moving post-New Year Ekiden, and push more people to run Tokyo.