What keeps this man going on his epic ultramarathon quest, he can’t really explain, but Alison Kay offers some insights 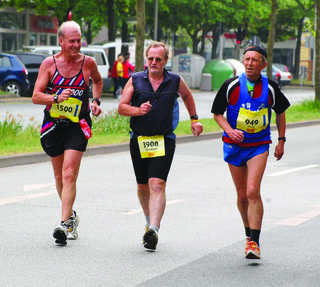 He might say it’s faith. Others might add words like passion, courage and sheer determination to succeed. Whatever drives him, Paul Selby is something of a running legend in his adopted homeland of South Africa.

He runs for pleasure and for charity. His business is designing and producing finisher medals for marathon runners worldwide. He launched the1000km Challenge to acknowledge those who run huge distances every year in training for the iconic Comrades Marathon in South Africa. This year he tackled his 25th consecutive Comrades Marathon – despite badly breaking his ankle on a casual training run last October.

Paul has come a long way from his 1983 invitation from workmates to participate in a company relay – he’s come more than 100,000km in fact. Back then he didn’t know what a relay was. Now he clocks up at least 2000km a year in official competitions, without counting the training runs.

Distance isn’t an issue for this English expatriate. In 1999 he completed a 180km back-to-back Comrades Marathon, raising 200,000 rand for the Cancer Association of South Africa. The feat has never been repeated.

In 2003, he joined a team of five fellow Brits aiming to run 1000 miles in 1000 hours around the London Marathon route, raising money for charity. The idea was to re-enact the feat of Captain Robert Barclay in 1809, who completed the challenge to win a bet.

This time, competitors covered the London Marathon course 38 times in 1 mile hourly segments every day and night for six weeks. Despite sleep deprivation and the short bursts of exercise, the competition was timed so that immediately after completing 1000 miles, they then ran in the official London Marathon to determine the winner.

When Paul realised that he could overcome the sleep deprivation of about an hour maximum at any one time, he took to running greater distances in between each mile to tone up for the marathon. The tactic worked; he finished the race and returned to South Africa with a share of the charity money to distribute in the homeland he adopted in 1973.

On 1 October last year, Paul sustained a triple ankle break during a training run – his first serious injury in 25 years of running. He focused on fully recovering in time for his 25th Comrades ultra-marathon this year – also his 640th all-time marathon.

Complications meant three months on crutches, after which Paul spent hours aqua-jogging and walking to rebuild muscle-tone around the ankle. In early April he completed a half marathon in Sao Paulo, Brazil, in 2:29 in an attempt to get on track for a shot at Comrades. He followed this up with marathons in London (5:43) and Hannover (5:10).
Happily his ankle held up, but he says his body seemed to collapse around him and with only 150km of running in his legs in eight months, Comrades was always going to be a tough call.

Paul’s 1000km in the 1000km Challenge was also under threat. The 1000km Challenge is a competition launched in 1990 by Paul and his wife Jenny, in memory of Jenny’s late husband Johnny Kambouris, a keen Comrades and distance runner.

The idea is for runners to complete at least 1000km in recognised road races in the year running from Comrades to Comrades. For this they receive a bronze medal, a t-shirt and recognition of the hours they have committed to distance running. A portion of their Challenge entry fee is donated to charity. Personalised silver, gold and platinum medals are presented to runners who cover 1000 miles, 1500 miles and 5023km (combined bronze, silver and gold distances) in a year.

Paul says 11 runners have completed all 19 years with one person holding the record of almost 9000km run in one year. Paul has completed almost 50,000km since inception and, despite his ankle injury, he scraped in with over 1000km this year.

The Comrades Marathon is the highlight of the year for distance runners in South Africa.

“It’s a life-changing experience,” says Paul. “It is so tough. You feel sorry for yourself. You hurt; you struggle and suffer; then you see the next runner and realise they are in the same plight. Comrades is a life adventure in one day. It motivates so many people.”

Sadly, at Comrades this year, Paul was forced to throw in the towel and accept defeat in Pinetown, with just 2 hours and 20km of the 90km to go. While rejoicing that his ankle had held up, he had to accept that lack of regular distance training had affected his strength in other ways. He says “with God’s help” he will be back on the winning trail next year.

One of Paul’s proudest achievements was receiving a Spirit of Comrades Award in 2007, acknowledging his support of the race, his back-to-back Comrades run, the 1000km Challenge and his penchant for helping struggling runners along the route.

Charitable causes are something Paul feels strongly about. In the country that has given him a home, a wife, a family and a living, he believes it is important to give something back.