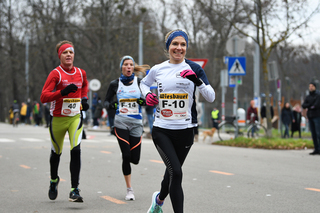 It was held under extraordinary circumstances – emotionally, athletically and organisationally. Allowed to take place as an elite event, a strict prevention concept was enforced in accordance with the Austrian Covid-19 protective measures regulation. The event was organised in cooperation between the Vienna City Marathon (VCM) and the Austrian Athletics Association (ÖLV) for 100 competitors. Spectators were not allowed. No public announcements have been made.

Temperatures of 3°C, cloudy skies and very little wind offered very good running conditions for the time of year. The course, of six 7km laps, was on the Prater Hauptallee, Austria’s centre of running, a location of world renown since Eliud Kipchoge ran 42195m in 1:59:40.2 at the INEOS 1:59 Challenge in October 2019.

Eva Wutti provided the sporting highlight. Her finishing time of 2:30:43 equalled Andrea Mayr’s Austrian record from 2009 to the second.

Argentina’s Daiana Ocampo kept pace with Wutti and went to front when Wutti had a difficult period after 34km, but later faded to finish two minutes in arrears – but still in a personal best time.

In the men’s race Dutchman Bjorn Koreman took advantage of the very good conditions to crack the Olympic standard and set a personal best of 2:11:07. Germany’s Johannes Motschmann ran his debut marathon in second, recording 2:14:38.