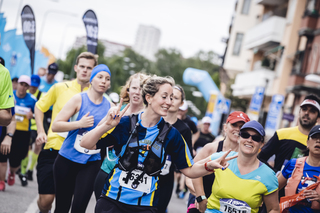 The ASICS Stockholm Marathon is one of Sweden’s biggest sporting events, with a scenic course through the streets of Stockholm and an unforgettable finish at the 1912 Olympic Stadium. The 2020 race was cancelled due to the ongoing pandemic but the organisers are planning for a better 2021.

How the coronavirus will affect next year’s race schedule is still unknown but the organisers are working hard to be able to stage safe and enjoyable events for their runners. Marathongruppen is the largest organiser of mass-participation races in the country with events such as the Ramboll Stockholm Half Marathon, Vårruset, Tjejmilen and the longest running success story: the ASICS Stockholm Marathon, which premiered in 1979. The 2020 race would have been the 42nd edition but was cancelled due to the pandemic, like other similar events worldwide. In 2021 Marathongruppen once again hope to be welcoming aspiring and returning marathon runners to the city.

“We have adapted to the current situation but to continue to operate we must look forward,” says Daniel Almgren, CEO at Marathongruppen. “Based on the information we have right now we are carrying out an extensive scenario study to plan how we will organise the race, depending on how the situation develops in the coming months.”

ASICS Stockholm Marathon is scheduled for 5 June. The two main scenarios are based on that being possible but, since the situation is yet uncertain and autumn 2021 is already becoming booked up with other events, an alternative autumn date of 9 October has also been secured. The decision on which date will be used must be made by 31 March.

The main scenario is to organise the event according to the original plan but with clear infection control measures such as surgical masks for officials, hand sanitiser, advice to stay home if you feel sick, all in accordance with the current recommendations from Sweden’s Public Health Agency. In the second scenario the event would be adopt additional corona requirements including social distancing, no friends or family in the event area, controlled corralling of runners, starting groups over a longer period of time, faster dispersal of runners after the race and extended opening hours at the expo. The maximum number of participants might also be reduced on a ”first-come, first-served” basis.

If the race has to be moved to October the same two-step scenario approach would be followed. In any event Marathongruppen will implement an infection control plan which has been jointly developed by organisers of all large mass-participation events in Sweden, together with the athletics, orienteering, skiing, cycling and swimming federations.

Another possible way to reduce the risk of crowding is to look at alternative courses – perhaps a one-lap course instead of the current arrangement where parts of the course are repeated twice. The organisers emphasise that if they have to make course changes due to the restrictions in force they will look at alternatives as central as possible.

Regardless of the exact course ASICS Stockholm Marathon will still go through Stockholm – one of the world’s most beautiful capitals. Built on 14 islands around one of Europe’s largest and best-preserved medieval city centres the Swedish capital has stunning and varied scenery on all sides. A perfect way to experience this is by lacing up your running shoes.

Running a marathon is a big challenge but the emotions you will experience at the start, along the course and at the finish line in the 1912 Olympic Stadium are far beyond the ordinary. It is a memory for life – and Marathongruppen is hard at work to help you create those memories in 2021.