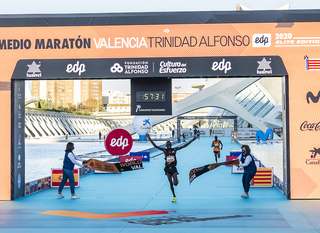 Kibiwott Kandie smashed the world record (subject to ratification) in the half marathon on 6 December, clocking 57:32 at the Valencia Half Marathon.

The 24-year-old Kenyan, who finished second at the World Half Marathon Championships in Gdynia, Poland, in October, knocked 29 seconds from the previous record of 58:01 set by Geoffrey Kamworor in 2019.

The world record was the target from the outset with the leaders covering the opening 5km in 13:37 and 10km in 27:25. Kandie, who was running his fourth half marathon of the year, began to push the pace in the 14th kilometre, bringing the leaders through 15km in 41:10, with fellow Kenyan Rhonex Kipruto and Jacob Kiplimo of Uganda, the reigning world champion over the distance, on his shoulder. Over the next 5km Kandie and Kiplimo took turns with the lead until the final kilometre when Kandie made his decisive move.

Among the Spaniards, the debutant Carlos Mayo achieved the second best time in history in the half-marathon with a time of 1:00:06, lowering the time achieved by Juan Antonio ‘Chiki’ Pérez (1:01:30) last year in the Valencia Half-Marathon. In the women’s category, the first Spanish national was also the debutant José Pérez, from CA Serrano, who was the first to cross the finish line in 1:12:57.

In the marathon, Evans Chebet (KEN) broke the Valencia course record with 2:03:00, making Valencia the third fastest marathon in the world (behind Berlin and London).

In the women’s category, Peres Jepchirchir also broke the course record with her 2:17:16; Ayad Lamdassem broke the Spanish record with 2:06:35. 61 runners achieved the Olympic qualifying times.