Volkswagen Bucharest Half Marathon
Sun 9 May 2021 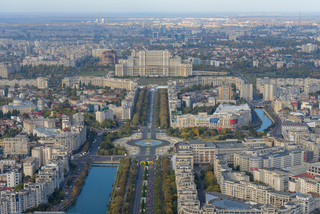 The capital of Romania is one of the most surprising cities in Central and Eastern Europe. Those eager to discover and explore new destinations will delight in the chance to uncover its hidden charms.

More than a bridge between East and West, Bucharest is a unique city that has top-quality museums, intricately carved churches and neoclassical palaces.

Due to its geographical position Bucharest emerged as the region’s largest and most populous city. Even though different cultures and civilisations passed over its territory the city built its own strong, unique identity.

The cultural philosophy is a mix between a local outlook and influences to which Romanians felt close, especially French influences. This is reflected in the nicknames by which the city is sometimes known: “Little Paris” or “Paris of the East”.

For more than 50 years after World War II the entire country became a prisoner of communism and subject of massive transformations. Earthquakes, fire and the two World Wars have destroyed a significant part of the city’s heritage and few of the city’s constructions are over 200 years old. This makes Bucharest a young, fast-developing and dynamic city.

The name originates from a shepherd, who was the first person to establish himself in the area, named Bucur – literarily meaning “joy”. Just like a youngster present-day Bucharest is a city full of energy, a city that knows how to live, a city that rediscovers itself every day – a city of joy!

Bucharest Half Marathon (date tba) starts and finishes in front of the Parliament Palace. Construction of the building started in 1980, during a period of economic hardship, using only materials of Romanian origin. It covers an area of 365,000 square metres and is the world’s largest administrative building (for civil use), the heaviest and most expensive building in the world and it is the third largest in volume.

In the oldest area of the city lie the remains of a fortress where Vlad the Impaler (Vlad Dracula) lived in the 15th century. These sights allow you to feel the power of a vibrant and eclectic city, and will offer you a once in a lifetime running experience.

The event is a World Athletics Bronze Label Race and incorporates the Romanian National Half Marathon Championships. The first edition back in 2012 attracted 6000 runners from 35 countries; the 2019 edition hosted over 19,000 runners from over 75 countries. The race has enjoyed one of the highest year-by-year increases in participation in Europe.

As a mass sports event Bucharest Half Marathon is second only to the Bucharest Marathon. It supports over 30 social causes so that awareness of the event is used to create a beneficial social and economic impact on the local community.

Apart from the sightseeing the flat and fast running course is a good reason for runners wanting to achieve new personal best times to come and take part.

See the latest news from OMV Petrom Bucharest Half Marathon