Kosgei and Yeshaneh will run in Delhi 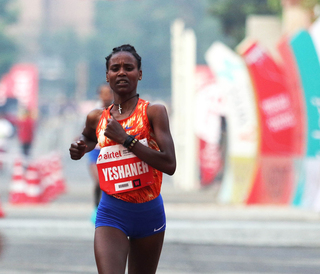 World record holders Brigid Kosgei and Ababel Yeshaneh have been added to an already outstanding women’s field for the Airtel Delhi Half Marathon on 29 November, making this race without doubt the strongest women's field in the history of the event.

At the Chicago Marathon in October 2019, Kenya’s Kosgei stunned the world when she broke the long-standing women’s world marathon record by more than a minute, clocking 2:14:04. Yeshaneh was a distant second on that occasion but nevertheless still ran a superb personal best of 2:20:51.

However, the tables were turned at the Ras Al Khaimah Half Marathon in February this year when a head-to-head contest in the final stages of the race saw Ethiopia’s Yeshaneh prevail in a world record 64:31 with Kosgei second in 64:49.

In their most recent outings last month, the 26-year-old Kosgei won the rescheduled London Marathon in 2:18:58 while the 29-year-old Yeshaneh had to contend with misfortune and fell at the World Athletics Half Marathon Championships in Poland, with just over three kilometres remaining, which took her out of medal contention although she recovered quickly to finish fifth.

The in-form Yehualaw finished second in the ADHM 2019 and third at the 2020 World Athletics Half Marathon Championships last month while Gudeta was the 2018 world half marathon champion.