Ultramarathon in a mountain paradise 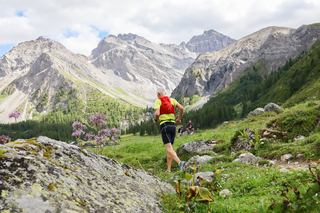 Swissalpine Davos is Switzerland’s Mountain-Ultramarathon – but more than that – it is the focus of the mountain-runner community that meets for the annual running event – the “Swissalpine Spirit”.

In the mid-1980s Andrea Tuffli, an orienteer and engineer from the town of Chur, wanted to organise something special in the Grisons. The result was the first Swissalpine Davos, held on 26 July 1986. At the time this first long-distance route, 67km long and with 2400m of cumulative elevation gain, was described as a “crazy challenge” although there were also shorter distances for not-so-crazy runners who increasingly took up the challenge.

In December 1985 Tuffli had contacted Horst Milde, race director of the Berlin Marathon, to ask if he would be interested in partnering with Davos. Milde liked the idea and offered Tuffli the chance to promote his race in Berlin. On 12 April 1986 Tuffli stood in the Hotel InterContinental and launched his vision of the largest mountain ultramarathon in the world.

In 1994, in what became the greatest media spectacle in Swissalpine’s 35-year history, three guest runners from the Tarahumara tribe in northern Mexico were invited. They competed in colourful traditional clothing including their self-made sandals made from old car tyres and with leather laces.

Performing demonstrations of their ancient running game Carreras de Bola and the alien culture – including the unfamiliar Swiss cuisine and the gruelling translations – were ultimately too much for the three runners who were used to running up to 800km a week. The 67km trail may have seemed like a sprint to them and the two of them who did compete – Cirildo Chacarito (39) and Victoriano Churo (56) – ended up 53rd and 142nd.

From 2010 to 2019 an average of 4700 participants took part in the demanding high-alpine running spectacle each year. The routes across alpine meadows and streams, over paths through larch and fir forests and on narrow rocky mountain trails make the Swissalpine a unique running event.

Even the journey on the world-famous ‘little red train’ (Rhaetian Railway) makes an unforgettable experience. All participants benefit from a free return trip from a Swiss place of residence, border station or airport.

The healthy climate was once the main attraction of Davos Klosters but it is now known for its variety of leisure, culture and above all sporting opportunities: hiking trails, bike routes, adventure parks and bathing facilities make it into a mountain paradise.

With almost 2000 participants the Swissalpine was the first and latest mountain running event to be held during the 2020 coronavirus pandemic. In October it became the first Swiss mountain running event to open registration for 2021. The positive feedback from 2020 motivates us all to set new goals. The runs are again spread over two days which reduces pressure on organisers and participants alike. If the Coronavirus forces cancellation entries will be re-booked to 2022 or 60% refunded. Swissalpine remains as exciting and challenging as it was back in 1986.

See the latest news from Swissalpine