A marathon dream transformed into reality 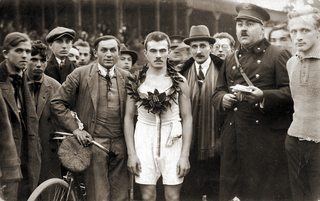 The only witnesses to the occasion were Turňa Castle, gnawed away by time, and one lone tree standing below it.

Five hundred metres beyond Turňa village, beneath this tree and beside the high road, the photographer focused on eight runners and a handful of other figures. They had all become obsessed with the idea of transforming a marathon dream into reality.

A trio of East Slovakian sports officials had returned from Paris to Košice with this dream in 1924. For it was on one hot summer’s day in the Colombes Stadium at the eighth Olympic Games that they became gripped by this most noble of all athletic disciplines.

Those men, who remain to this day captured on that wonderful old yellowed photograph in their vests and shorts had a true baptism of fire awaiting them – even though it was 28 October and late in the year. It was a trial of as yet untested strengths and abilities. Ahead of them stretched more than 42 kilometres of road through the countryside all the way back to Košice.

Halla, Tronka, Badonič and Kulcsár from the local Košice Athletics Club, Schuller from Slávia and the valiant soldiers Lenart, Zajič and Schmidt. There were no famous Olympic runners there that day, for it was only later on that they became charmed by the atmosphere of the Košice Marathon.

In the propositions issued for this race by the Czechoslovak Amateur Athletic Union and published in the local newspaper Kassai Napló, it was declared that the first across the finishing line would receive the title of ‘Winner of the Slovakian Marathon’ together with an honorary prize and a certificate.

The crack of the starter’s pistol cut through the cold autumn air exactly twenty minutes after midday, and these eight marathon pioneers ran off on their adventure.

At Čečejovce Halla had already built up a 300m lead and the spectators welcomed him with applause, but when the Tatra limousine came through with the members of the jury who were ensuring the race rules were being kept, sarcastic comments rang out: “Why aren’t you running, you lot? Sitting in a car – anyone can do that!”

By the turn-off to Malá Ida cyclists were already waiting for the runners so that they could accompany them and race on ahead to announce their imminent approach to the Košice crowds. A large number of onlookers were lining both sides of Komenský Street, while others had occupied the best places they could find on the wooden grandstand of the sports-ground at the area then called Gajdove kúpele (“Gajda Spa”).

The crowds roared a joyful welcome to the be-whiskered and fresh-looking Halla. A garland of laurel rested on his shoulders, the military band played a march, and in recognition of his victory the sky thundered with several salvoes of gunfire. It was Tuesday, 28 October 1924, a little before half past three in the afternoon.

Many years later, on the marble plinth beneath the sculpture of the marathon runner in the little park in front of the East Slovakian Museum, there appeared the name of the first hero of the Košice Marathon – Karol Halla.

At the celebration dinner following the race the organizers praised Halla’s conscientious and thorough preparation. They set their minds not only on holding a marathon in Košice every year, but also on making sure that each time there would be international participation.

The main ideas were presented by Vojtech Braun Bukovský. It was as if he had sensed back there in Paris that he would give up a good part of his life to the Marathon. He was not yet 30 years old when he congratulated Halla, but he already had vital experience in athletics, university studies, and work in his family’s retail business. The variety of his activities was remarkable. Apart from the Marathon he is recorded as being a tireless organiser of cycle races, fencing, skiing and wrestling competitions, as well as being a journalist.