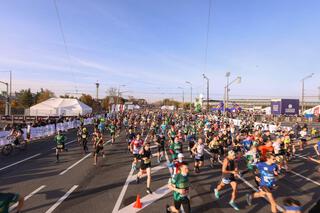 The Kazan Marathon is one of the biggest races in Russia. After it was re-established in 2015 it grew from 2000 to 30,000 participants in just four years.

The race dates back to 1974 when a small community of running enthusiasts decided to run 50km together. For the next 18 years it was held annually and attracted hundreds of amateur runners from all over the region but then ceased.

After 23 years off the scene it came back with a bang in 2015. Since then the Kazan Marathon has been attracting thousands of local runners and tourists from all over the world to the capital of the Republic of Tatarstan.

Athletes come to Kazan again and again to feel the unique Tatar spirit and to see the most magnificent landscapes and landmarks. The most famous symbol of Tatarstan is the Kazan Kremlin – a UNESCO World Heritage site. The race start and finish lie right in front of this chief historic citadel of Russia. Kazan Marathon participants run past many other world-renowned sights such as The Kul Sharif Mosque, the Kaban Lakes, the Millenium Park, the Kazan Family Centre, the Kremlin Embankment, the Kazan Circus and the Central Stadium.

What attracts tourists here is the peaceful coexistence between all different ethnicities and beliefs. There are more than 150 nationalities: Tatars, Russians, Mordvins, Udmurts, Bashkirs, Chuvash and others. The most common religious beliefs are Islam and Christianity. It amazes foreign visitors to see how these very different religions are always equally treated: mosques and churches stand next to each other; Orthodox priests and Islamic muftis are called upon at all public events. People never argue over religion. Kazan houses the only Temple of All Religions in Russia, bringing together architectural elements of 16 world religions.

Tatarstan is widely known as one of the most welcoming places in the world. Since 2016 the Republic has been operating the Visit Tatarstan program – the official tourism brand, the purpose of which is to inform tourists, develop the tourism potential of the region, partner projects with local companies, and drive international expansion. “Tatarstan: 1001 pleasures” is the key message that tourists receive. One of those 1001 pleasures is the Kazan Marathon which hosts thousands of foreign sportsmen from all over the world every year.

In addition to the marathon there are 3km, 10km, and half-marathon distances offered. The Kazan course has the least range in elevation among all the races in Russia – only 96m in total. This makes it easier for the runners to improve their personal best times. The current event record-holder is Stepan Kiselev who ran 2:12:56 in 2019. The Kazan Marathon holds a special race for 3–6-year olds along with a 60m race for toddlers under three years old.

Moreover, there is a corporate league that allows local companies to enter their own teams. Points depending on individual finish times are added up to decide the winning team.

Another exciting part of the Kazan Marathon is the men vs women competition. A runner who gets to the finish line first wins but if a runner also outruns a particular competitor of the opposite sex they get an additional prize. This is a fun and exciting competition to see so hundreds of people watch the live streams of the men versus women races every year.

The Kazan Marathon is a qualifying race for the Abbott World Marathon Majors, which means participants can become a part of the World Athletics Championships. Moscow and Kazan are the only two qualifying marathons in Russia:

This year’s marathon showed the unity and strength of the running community in the Republic of Tatarstan. Face masks, antiseptics, and limiting of numbers to 11,000 did not prevent athletes from celebrating the end of the running season together. Sadly, international runners could not participate in the 2020 marathon but Kazan can’t wait to meet them all in May 2021.

Charity is an integral part of the Marathon. For the last 5 years the Kazan Marathon has raised funds and organised charitable events at the race for children with Rett Syndrome, AIDS/HIV+ people, and local endangered species. One of the main partners of the marathon is the Ronald McDonald House Charity, which helps seriously ill children to be close to their parents while receiving therapy.

A big team that brings the Kazan Marathon to life works on the race all year to create the best possible experience for participants. Dozens of sports events producers, designers, and marketers make the Kazan Marathon a celebration of unity, diversity, and a healthy lifestyle.

When athletes get to the finish of the Kazan Marathon, they go home as superheroes who overcame their fears and hardships. But they also leave the finish line with the one-of-a-kind feeling of belonging, which they will cherish all year until the next race in Kazan.