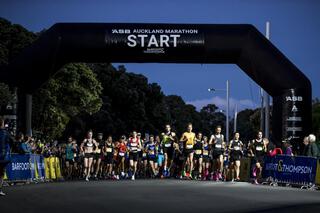 Conditions dawned near perfect on the morning of 1 November for the 2020 ASB Auckland Marathon and the 14,000 participants. The wheelchair categories first to head away from Devonport at 05.55 followed five minutes later by the ASB Marathon competitors.

In a year without precedent around the globe, this was a day of celebration as thousands of Kiwis took to the Auckland streets in the five different races on offer, with young and old, fast and not so fast running it their way, many as part of the Charity Superstar Programme raising hundreds of thousands of dollars and delighting in the chance to run across the Auckland Harbour Bridge.

Daniel Jones won for the first time in Auckland. The 30-year-old headed to Kenya earlier this year for a five-week training camp which thanks to the global pandemic turned into a five month stay at altitude. The Wellington Scottish runner put that work to good use as he won by almost five minutes, after having finished as runner-up in 2018.

“It is a pity we don’t have internationals here but it is amazing to get that win" said Jones. We are one of the lucky countries where racing is underway. It is an awesome turnout, I think I can speak on behalf of everyone when I say it is just good to be breathing hard again!”

In the women’s marathon three-time defending New Zealand champion Alice Mason made no race of it, settling into a strong rhythm amongst the men and going through the 10k mark in tenth overall. Thereafter she found herself all alone throughout the 42km distance.

“It got a bit lonely, but it was alright," said Mason. “I haven’t raced here before and the first 15 or 16k is undulating, but after that it was pretty nice running.”

In the Half Marathon Olympian Camille Buscomb took the women’s race while Cameron Graves smashed his way to a new race record of 1:05:24 in winning the men’s. Buscomb described conditions that in the end proved challenging as the temperatures warmed up on course. She won by almost five minutes.