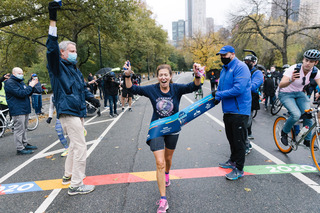 1 November was the final day of the Virtual TCS New York City Marathon and the originally scheduled date of the in-person marathon.

Runners from locations all over the world participated including thousands hitting the streets of New York. Throughout the virtual event window, from 17 October – 1 November, more than 28,000 runners registered to be part of the global virtual event.

As part of the virtual marathon runners chart their own marathon courses. To capture the feeling of running the TCS New York City Marathon’s iconic course many runners finished at the official finish line in Central Park. New York City Mayor Bill De Blasio celebrated and greeted runners as they completed their 26.2-mile accomplishment.