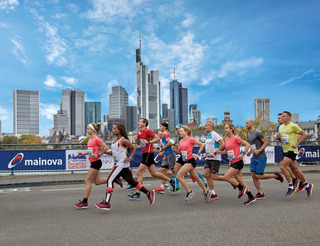 For many runners the last Sunday of October is traditionally reserved for the Mainova Frankfurt Marathon.

Even when there is only a virtual race due to the pandemic. A total of 4674 participants took part, 1680 of them women – and from all over the world.

The numbers show the significance of the oldest German city marathon: Runners from 56 nations took part: 11 per cent of all participants. The English were most enthusiastic with 52 runners, as were the Italians and Poles – 46 runners each – and athletes from Kenya, Peru, Afghanistan and China pulled on their running shoes too.

1084 Frankfurt residents themselves ran the marathon distance, 1700 ran the half while 1208 runners tackled the 10km and 682 5km. Each runner alone, but somehow still together. The hashtag #runtheskylineathome united the participants and it didn’t matter who ran the fastest.

Race director Jo Schindler called it “overwhelming”, how many runners have already registered for the autumn marathon in Frankfurt in 2021. Over 850 signed up in the first 24 hours after registrations opened. “We have never yet had so many registrations the day after the race. That gives us great support for our efforts to bring back a great marathon and street festival on 31st October 2021. It is terrific to see how loyal and vibrant our Frankfurt Marathon community is even in times of crisis. That is a great inspiration and motivation for the year ahead,” said Schindler.