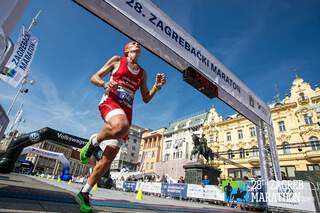 Due to the deteriorating epidemiological situation in Croatia, the organisers were forced to make a difficult decision and cancel this year’s Zagreb Marathon for the first time in the history of the Croatian state, just three weeks before it was scheduled to take place.

Despite the short deadline, the desire to mark the traditional date of the running festival in Zagreb on the second weekend of October triumphed and the Virtual Zagreb Marathon 2020 was organised, which took place over two days, October 10 and 11, 2020.

Three races could apply: virtual Garmin 10K, half marathon and marathon. The runners, our participants, who had been preparing for many months, were still able to test their abilities and form through an individual performance. All the results were collected, processed and the order was published on the race website.

The winners of the marathon race were Zvonimir Vlahović with a score of 3:18:33 and Marija Simeonov with a score of 4:31:11. In the half marathon, the first place in the men’s competition was taken by Marin Desnica in 1:27:38 and in the women’s marathon by Nikolina Petričavić with 1:52:21. The virtual Garmin 10 K also has winners and these are Tea Faber for 37:12 and Igor Mikuš for 46:02. The winners also received valuable prizes that are not only virtual, but also gifts from the partners of the Zagreb Marathon, Intersport H d.o.o., Garmin Hrvatska and Gaz Nutrition. All other participants will receive a unique T-shirt of the Virtual Zagreb Marathon on their address, as a sign of remembrance and this year marked by unique events.

Race organisers said: “Although we are aware that it is certainly not the same as when you hear the starting gun, and in difficult moments during the race you have a lot of support along the track and in competition, we are glad that real athletes did not lose motivation to achieve their goals. Now we are left to look forward to 2021 and hope that this year will be an exception. We are already planning the 29th Zagreb Marathon, October 10, 2021, which will be marked by the joy and satisfaction of many participants, as befits an event like this.”