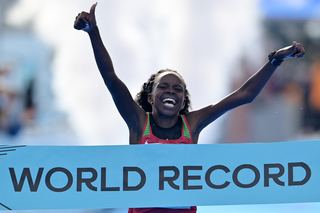 Peres Jepchirchir became women’s Half Marathon World Champion in Gdynia (POL) on 17 October and in doing so improved the women-only world record that she had broken only six weeks before.

In the men’s race Uganda’s Joshua Cheptegei, heavily-favoured due to his recent track performances, was defeated by 19-year old compatriot Jacob Kiplimo (UGA) who posted the second fastest time of the year so far.

Kenya’s Joyciline Jepkosgei led a group of 13 through the first 5km in 15:20 while Turkey’s Yasemin Can also pushed the pace On the second of the four laps defending champion Netsanet Gudeta took a tumble and lost ground on the lead group. Can led through 10km in 30:47 but Jepchirchir surged strongly on the third lap. Three Ethiopians – Ababel Yeshaneh, Zeineba Yimer and Yalemzerf Yehualaw – were tucked in behind along with Germany’s Melat Kejeta. Yeshaneh hit the front but drifted towards the kerb and became entangled with Jepkosgei. Both fell leaving Yehualaw, Can, Kejeta and Jepchirchir still in contention. Jepchirchir and Kejeta drew clear as they raced downhill towards beachfront finish. Entering the finishing straight the Kenyan surged clear to take the victory while Kejeta sliced more than three minutes off her personal best in second. “My goal was to win this race,” said Jepchirchir. “I realised that [the world record] could happen when we passed 20km. It was a little bit windy, but the course was good for me.”

In the men’s race Kiplimo upped the pace on the final lap such that no one could keep with him as he left Kibiwott Kandie – twice under 59:00 in 2020 – five seconds adrift and Ethiopia’s Amedework Walelegn a further 14 seconds behind. The leading contenders had cruised through the opening 5km in 14:20 waiting for one another to make a move. There were still 23 runners together as they went through 10km in 28:23. Only into the second half of the race did the pace pick up through Kandie and Ethiopia’s Guye Adola. Kandie stepped the pace up even more as he clicked through 15km in 42:17. 11 runners were together as they started the last lap. Kiplimo joined Kandie at the front with a gap back to Cheptegei. Kandie fought back to draw level but Kiplimo had gained a lead of 4 seconds by the time he passed through 20km – with his last 5km run in 13:37.