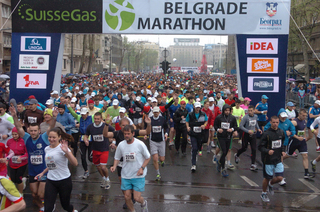 Unfortunately the 33rd Belgrade Marathon, scheduled for 18 October 2020, will not be run as a physical event.

We did not get permission from the Serbian Health authorities to go ahead. It was judged as an increased risk – even with all measures we were ready to implement and adjust.

Instead of 25,000 participants in three running events we were ready to go ahead with 4000 people or less and not to hold the Fun run and many other accompanying smaller social events. Of course, we had planned the starts in many waves and so on and so on… but in vain.

On the other hand I went to Budapest and saw that they were lucky enough to get the permission to put the race on – in exactly the same way as we had planned to organise our Belgrade marathon. There was good weather in Budapest too, and the success was complete in those circumstances.

The irony is that the Covid19 situation in Hungary is much worse than in Serbia – but we must now just have a virtual 33rd Belgrade marathon.

We were denied permission on the third time of asking, just two weeks before the race. We had hopes that something would change in positive way for us – but it did not happen. We had made a detailed plan which was entirely comprehensive and coherent with the measures already in place for all kind of gatherings, inside or outside.

Another irony is that in Serbia it is not allowed for more than 30 people to gather together outside, but up to 500 people are allowed to do so in cinemas or theatres. We had thought that if Budapest and Sofia were going ahead – two capital cities of two neighbouring countries both less than 400km away – then we could go ahead as well. We were wrong.