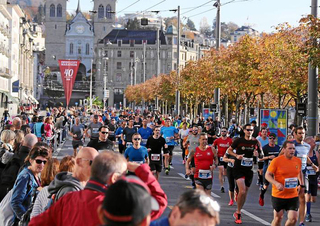 After cancellation of their flagship event, originally scheduled for 25 October, the Swiss City Marathon Lucerne organisers put together the “YesWeRun” series for September/October with their partners Coop, ASICS, Emmi, Generali, Lucerne Cantonal Hospital and MSD.

The first six such events were held in September and showed that events can be held if the protection conditions are met – Corona-compliant events do work! So far the corona-related adjustments have met with a great deal of understanding among athletes. The athletic performance was also not affected. The joy of their own performance could be seen on everyone at the finish. Thanks to a simple setting, the limitation of the number of participants, the free choice of the start time and the contact tracing of all participants and helpers, the events meet the framework conditions specified by the Federal Council and the BAG. The protection concept was developed in accordance with the applicable requirements and is based on the framework concept of Swiss Runners.

Thanks to the Virtual Challenge from 24-25 October, the SwissCityMarathon community will also be encouraged to run at home. Thus, despite the cancellation of the major event in 2020, the athletes can enjoy a real “marathon week”.

The remaining four “YesWeRun” events will be run in the Zug and Lucerne region, the first of which will take place on Tuesday 20 October in Cham (ZG). Runs will then follow on 21–23 October on the Alpenquai in Lucerne, around the Rotsee and in the Horw community. Here, the runners have additional starting options over the distances of 4.4–6.3km. You can register online at www.yeswerun.ch