Runners in Prater Park, Vienna and worldwide try to run as far as possible in 1:59:40 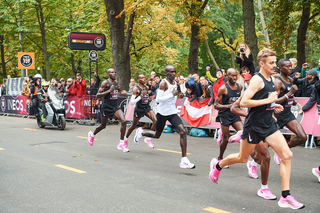 The Vienna City Marathon will celebrate the first anniversary of the INEOS 1:59 Challenge and Eliud Kipchoge’s historic marathon in Vienna during this weekend and on Monday.

The Kenyan became the first athlete to break the two hour marathon barrier a year ago in Vienna. He clocked 1:59:40.2 on the Prater Hauptallee on 12th October 2019.

The Vienna City Marathon (VCM) will organize the “VCM Tribute to Eliud Race” on Monday, 12 October. The challenge is to cover as much distance as possible during a set time of 1:59:40.2. There will be two separate races during the afternoon and in early evening in the Prater Park, the venue of Kipchoge’s unique race. While these races are almost sold out, runners all over the world have the opportunity to participate in a virtual event which runs from Saturday until Monday.

You can run or walk for 1:59:40.2 with family, friends or alone wherever you are. Whether it is a half marathon or an even longer distance, you can track your activity and upload your distance with a GPS sports watch or a running app. The challenge ends on Monday at 8.30 pm (Central European Time). At this time you will need to have entered the distance you have covered. Please follow your local Covid-19 rules when you choose the location of your race.

By taking part in the “VCM Tribute to Eliud Race” runners will support a VCM charity project. The organizers support the running and health initiative “The Daily Mile Austria“, which is active in primary schools and kindergardens. Runners who enter the virtual race will receive an individual start number with their name and the signature of Eliud Kipchoge to download and print. They will also receive a certificate with a signature of Eliud Kipchoge to download and print. While they will be included in the results list of the “Tribute to Eliud – Global Race“ they also become part of the “Tribute to Eliud“ community.

Next year’s Vienna City Marathon will take place on 12 September.