Kitata and Kosgei triumph in London 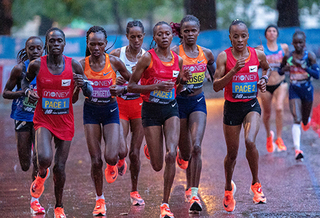 Kitata triumphed in a thrilling three-way sprint ahead of Vincent Kipchumba and Sisay Lemma, with the struggling four-time champion Kipchoge nursing a blocked ear and a sore right hip fading back to eighth place in the final stages. Kitata became only the third Ethiopian winner of the race and the first since 2013 in the slowest winning time for seven years.

By contrast defending champion and world record-holder Brigid Kosgei dominated her opposition yo win by three minutes. Despite the rain, Kosgei felt it had been a “wonderful” experience as she celebrated a second London Marathon crown to go with her two Chicago victories. Behind her the US athlete Sara Hall produced a powerful finish to prevent a Kenyan one-two as she made up 44 seconds on the last of almost twenty 2135m laps to overtake world champion Ruth Chepngetich in the final metres.

Meanwhile 45,000 other marathon runners were going for it on their own each of them targeting a socially-distanced 26.2-miles on a course of their choosing on the day (4 October) as they aimed to raise funds for their chosen charities. Runners from 109 countries entered the virtual marathon and as of 18:00 more than 25,000 had completed their own unique London Marathons.