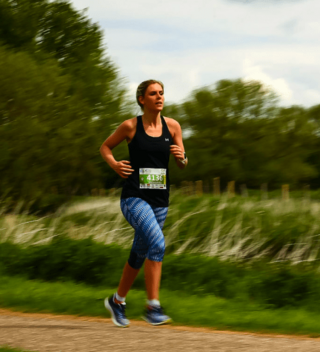 The Rightmove MK Marathon Weekend had record entries at the beginning of March so it was quite a blow when the early May event had to be postponed until September.

As it became more and more unlikely that large running events would be able to resume in September the MK Marathon team started exploring alternative safe race options. They came up with the ‘Reimagined Race’: not a virtual race but a measured and certified race route taking in the beautiful lakes and scenery of Milton Keynes.

Six courses had to be measured for the Fun Run, 5k, 10k, Half Marathon and Marathon and also the Marathon Relay. This was possible because of the many cycleways and public footpaths that pass under or over the roads. The race featured GPS timing technology with built-in turn-by-turn voice navigation using the RunGo app for round-the-clock service between 6-19 September. It was a London Marathon good-for-age and Abbott World Marathon Majors Wanda Age Group World Championships qualifying event.

Race Director Andy Hulley added “The courses were accessible whenever the runner wanted to race – any time of the day or night. No weather concerns, no early bus rides, no long waits at the start line… no hassle. We also chose the beautiful Willen Lake event lawn to start all races, as it offered good parking, toilets and a cafe.”

The thousand runners who took part in the Reimagined event all ran the same course, with GPS timing, leaderboard and prizes. The feedback from runners has been fantastic. “I wasn’t going to enter but I’m so glad that I did. Thank you for creating such a brilliant event,” said Luke Chambers.

Three and a half thousand other runners also took part in a Virtual Race over the same two-week period on a route of their choice.

The Rightmove MK Marathon Weekend 2021 has been set for 2–3 May and entries are now open.

See the latest news from Milton Keynes Marathon & Half Marathon