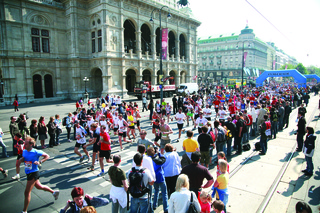 “There’s a special feeling to the Vienna City Marathon that keeps drawing me back,” says US runner Bill Kole.

“Usually I’m oblivious to the scenery around me – especially in the painful last stages of a marathon – but Vienna is so incredibly beautiful, and the course takes you past the very best of the city. The organization is superb, and it seems like local Austrians are clapping, shouting and cheering you on for every single meter of the course. I’m from Boston, so I’m familiar with big-city marathons, but you have to experience the spirit of the Vienna City Marathon for yourself. It’s truly unique”.

Up to 30,000 runners take part in one or other of the competitive races at the Vienna City Marathon, cheered on by thousands of spectators. In addition to the classic marathon one can participate in the half marathon, a relay marathon or one of the two races for juniors and kids. The Vienna City Marathon attracts a truly international field of runners from 100 nations. Participants are enthralled all the way from the start at the UN office buildings to the impressive finish line at the “Heldenplatz” in the very centre of the city. The “Heldenplatz” means the “Hero’s Square”, which fits perfectly with the spirit of the marathon event. “Where else do you have a finish, that embodies the spirit of the race in its name?”, asks Rafael Penalba of Germany. He is a member of the “VCM Friendship Runners”, which is a group of knowledgeable runners and participants who can assist people in their native language at the website www.vienna-marathon.com. As one can imagine, a huge network of contacts and friendships has evolved out of this program.

The race motto “Run Vienna – Enjoy Classics” melds together running and classical culture, which offers a unique experience at the Vienna City marathon. Along parts of the course the runners are swept forward by the music of Wolfgang Amadeus Mozart, Joseph Haydn, and Johann Strauss. In the run-up to the marathon there are special concerts exclusively for the participants of the Vienna City Marathon. This year, the Vienna Philharmonic Orchestra together with conductor Sir Simon Rattle gave an inspiring concert in the “Golden Hall” of the Vienna Musikverein. About 700 runners and accompanying friends enjoyed the performance, which inspired them for the upcoming race.

The Vienna City Marathon stages an annual event that highlights Vienna’s historical and international flair. Every year the VCM has had a new and exciting theme, for example celebrating a known historic personality from the classical music world. Next year the marathon celebrates another classic historical event: the first marathon run, that took place after the Battle of Marathon 2,500 years ago in ancient Greece. We will honor this momentous run and its spirit in an exciting way, memorable for every runner taking part in the Vienna event on 18 April 2010.

The marathon itself heads through the most impressive, modern and most historical parts of Vienna. Running through Vienna feels just like visiting a museum in running shorts: you start out in front of the skyline of the UNO buildings, cross the “Reichsbrücke” over the Danube River, pass the Ferris Wheel and run through the Prater park. You pay a brief visit to the former imperial residence, Schönbrunn Palace, and see many of the magnificent classical buildings such as the Vienna Opera along the “Ringstrasse“. You are guided through the Prater by classical music, as if through a giant green auditorium. And finally you run through the city gate and into Heldenplatz in the heart of the city, to the finish line.

The fastest times ever achieved in Vienna – 2:07:38 by Abel Kirui in 2008 and 2:23:47 by Maura Viceconte in 2000 – illustrate the quality of the course. It combines ample, flat roads with the architectural highlights of the city and huge green recreational areas. “It is very easy to reach the start, without any stress, using the underground”, adds Jerome Segal, a French citizen and marathon runner living in Vienna. You can get there from the City centre within 15 minutes. This is good news for fans and friends alike. Those coming to support the runners on the streets of Vienna have very good access to many attractive points along the course offered by the public transport system.

There is a special technical service that makes the Vienna City Marathon even more engaging: the sending of live text messages with split times every five kilometres and finishing times to your mobile phone. First introduced in 2000, it was a world innovation at that time, and in 2009 a total of 102,894 text messages have been successfully delivered in real time. This service is free of charge and became very popular especially among runners’ supporters. One can follow the race of a specific runner and receive their expected finishing time with this unique system. A similar service was set up at the Berlin marathon using the Vienna City Marathon’s expertise and system.

“Runners are supported in a very encouraging and professional way – before, during and after the race”, emphasises Jean-Marie Welbes of Luxembourg. Various side events contribute to the friendly and exciting atmosphere at the Vienna City Marathon. A very special occasion is the “International Friendship Party” on the day before the marathon race. Located at the grand ballroom of the Vienna Town Hall this get-together enchants guests with its charm, beauty and unique ambience. Thousands of runners prepare themselves for the race and refuel their energies with a traditional Austrian pancake called “Kaiserschmarrn”, or pasta and soup.

“I will run the Vienna City marathon again next year, because it is magical to run in one of the most beautiful cities in Europe,” enthused Bill Kole.

The next edition of the Vienna City Marathon takes place on 18 April 2010.
www.vienna-marathon.com