The Authentic Marathon tried valiantly to keep its place on the road – even in the COVID-19 era. Although cancelled just six weeks before the race the work done in preparation was not wasted. It helped to define the approach that will be needed before races can find their place on the road again 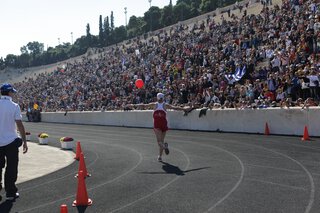 Greece took strict measures quite early on to safeguard against the spread of the Covid-19 pandemic. By doing so the registered number of infections in the country has been kept low compared to the rest of Europe, allowing Greece to remain active in various aspects of social, cultural, touristic and sporting life.

Within this framework the 2020 Athens Marathon was planning to welcome thousands of runners – both local and international. They were to honour history by being part of the re-opening of running events in Europe. Organisers wanted to present a major international running event focused on the runner and providing all possible care to make sure that safety and the protection of public health remained the top priority in all cases.

With this ambition in mind the Hellenic Athletics Federation (SEGAS), rights holder and organiser of the annual Authentic Marathon, drew up a manual of rules and regulations to ensure that the health of participants, staff, paramedics and volunteers would be protected throughout the event. The Greek State had already approved the Manual of Rules and Regulations that would govern the event and specify all health measures and procedures that would be followed during, before and after it took place.

Social distancing and contactless procedures were to allow all participants to enjoy the actual race without concerns regarding health safety. The core of this Manual suggests how to allow for the participation of 12,000 Marathon runners, all allocated in blocks of 500 runners each, who would cross the start line in lines of eight. Start waves with time differences would be applied to all starting blocks and lines. Services at the feed zones on the course and the Finish would be provided in a contactless way. There would be no EXPO held this year: runners would collect their race kit from the event’s Registration Centre, the opening hours and days of which would be extended in order to avoid crowding.

The Athens Marathon organisers were very confident of the protocol that had been developed. It is concrete, health and safety-oriented and covers every detail of such an important event as the Athens Marathon.

The “Athens Marathon. The Authentic” is not just another international Marathon event, but a bridge from legend to history that showcases the strength of human will. It is a source of values, of social responsibility, environmental sensitivity, friendship and solidarity.

Since 1983 the Marathon has been dedicated to the memory of the great Greek pacifist Grigoris Labrakis and has the unique privilege of following the footsteps of the legendary Athenian soldier and the original route of the first Modern Olympic Games Marathon in 1896.
Activities are extended over five days and hosted in significant landmark venues of Greek history and culture. These include the historic Marathon Start, the Marathon Tomb, the Zappeion Megaron and the Panathenaic Stadium.

It consists of races at all distances; Marathon, 10km, 5km and 3km, Kids Runs and runs for individual with disabilities and Special Olympics’ athletes. More than 60,000 runners participated in the 2019 edition, while half of those who ran the Marathon came from more than 130 other countries, making the Athens Marathon one of the most international and welcoming marathon events around the world.

The organisers are committed to providing each and every one of the participants with a personalised running experience of a lifetime. To achieve this the registration and kit includes services to maximise the feeling of the event. Personal photos, unique merchandising products, personalised information and guidance through the event’s app, an exclusive official Athens Marathon t-shirt and most of all – a medal with artistic value that bears all the historic and social significance of the Marathon Movement.

In 2019 the Hellenic Athletics Federation decided to depict the history of the sport on the medals of the Athens Marathon, launching a series of medals that will be completed in a period of eight years on which a different historic milestone of the Marathon’s long history is presented each year. Famous artists have already committed to portray the best moments of the sport. The first medal of this unique series depicted the “490BC Battle of Marathon” portrayed by the famous Greek painter, Alekos Fassianos. In 2020 the second medal will recognise Pheidippides, the legendary “Runner-Messenger”, modelled by the famous Greek sculptor, Kostas Varotsos.

The Athens Marathon, supported by the Greek National Tourism Organisation, is organised by the Hellenic Athletics Federation, while the Attica Region, the Cities of Athens and Marathon and the Hellenic Olympic Committee are co-organisers. The event has a Grand Sponsor, the gaming company OPAP S.A., and enjoys the sponsorship of a large number of major local and international brands.