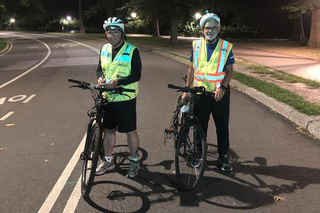 From the world’s most prestigious events like the New York City Marathon or the World Athletics Championships and Olympic Games to the modest small town 5k – they all depend on an obscure mechanical device to ensure the accuracy of the course: the Jones Counter.

The Jones Counter, and variations of it, have been used to ensure the accuracy of nearly every major road race in the world for more than 40 years. Even though the marathon is one of the oldest events in athletics, the method and tools of accurate measurement only started to evolve in the 1960s thanks to the pioneering work of Briton John Jewell and Ted Corbitt of the US.

Jewell did extensive research on the various methods of measuring road courses and published a groundbreaking paper in 1961. Shortly thereafter, Corbitt travelled to the UK to compete in the London to Brighton road race which Jewell had meticulously measured. Corbitt and Jewell worked together to refine the process and Corbitt brought the techniques back to the USA where he published the “Measuring Road Running Courses” article in 1964 for the Road Runners Club of America.

The concept is simple: use a counter similar to the one found on a surveyor’s wheel to measure the number of rotations of a bicycle wheel. But each rotation is in excess of two metres and a much finer degree of resolution was needed. At first this was achieved by numbering each spoke on the front wheel and using them to count fractions of a revolution – but this was a tiresome procedure. It was only several years later that someone developed a reliable and readily-available device to do the job. That person was Alan Jones, a computer engineer for IBM living near Binghamton, New York.

“In 1970 I ran in my first road race – advertised as 20 kilometres,” Jones recalls. “While I didn’t run a fantastic time I knew it was faster than seemed possible. I did a rough calibration of my car’s odometer, and then drove over the course. I found it to be about 11.4 miles instead of the 12.4 it should have been.”

This incident spurred Jones’s interest in measuring a course using the calibrated bicycle method advocated by Jewell and Corbitt, but adding his own crucially important technical modification.

“I got hold of a revolution counter but I needed a way to revolve it as the wheel turned. I went to a bike shop and found an odometer that I hooked to my counter by filing the circular shaft on the counter into a square cross-section and attaching it to the gear. The device was then slipped over the front axle of my bicycle.”

Jones set up a calibration course as the measurement method required but, using the new counter he had devised, was able to directly calculate the conversion factor from recorded digits to metres. There was no longer any need for laborious spoke-counting before every measurement reading.

Corbitt certified the New York course in May 1972. Within a year Veeder-Root had stopped making the counter Corbitt was providing, which gave one count per wheel revolution. So he wrote to Jones asking if he could supply 30 counters.

“I really didn’t want to get involved so I asked my son, Clain – who was nine years old – to help. He was able to do a bit of the work and I paid him one dollar for each one. As time went on Clain took over more and more of the business. I mailed the first counter to Ted in September 1973. By the end of the year all 30 counters were gone but even before then Ted wrote to ask me to put together another 30.”

“On 5 January 1974 Ted sent me the first certification application done with a Jones counter other than my own. Business picked up and Clain got a telegram in the spring of 1976 from the Montreal Olympics asking for four counters.”

The pandemic has caused the cancellation of nearly all road races including the 50th anniversary TCS New York City Marathon. While the celebration has been delayed a year one aspect was celebrated. On 8 September 2020 Olympic marathon measurer David Katz remeasured the original marathon course run completely within Central Park. It was exactly 50 years ago to the day since Corbitt’s first measurement, and a way to honor Alan, Ted, John and the New York City Marathon.