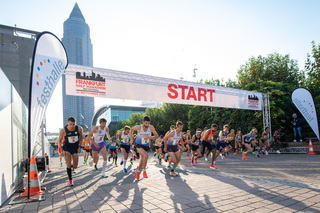 Amanal Petros and Melat Kejeta won their respective races in the Frankfurt Invitational Half Marathon on 13 September in Frankfurt’s Expo area closed in compliance with the corona-related hygiene measures and without spectators.

While Petros ran 63:31 Kejeta posted an impressive 69:04. Both will now lead the German teams at the World Half Marathon Championships to be held on 17 October in Gdynia (POL).

In the men’s race, Ali Mohamed (NED) and Solomon Kidane (ERI) took second and third places in 63:51 and 64:15 respectively. German marathon record holder Arne Gabius suffered breathing problems and dropped to 18th in 67:30 minutes. Among the women Miriam Dattke finished second in 72:03 minutes ahead of Katharina Steinruck who set a personal best with 72:23 on the flat circuit in warm weather.

“Under these circumstances it was a very successful race and positive for everyone involved – for the athletes and for our own [organising] team,” said Jo Schindler, race director of the Mainova Frankfurt Marathon which was cancelled this year due to the corona pandemic.