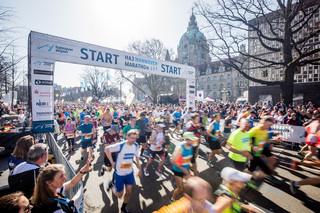 The anniversary had to be postponed – now the anticipation is even greater for a big reunion of the national and international running community in Hannover at the city’s biggest street party. Participants from over 100 countries took part in 2019 in front of the picturesque city hall of the capital of Lower Saxony.

Besides the marathon distance runners can choose between half marathon, 10km or the marathon-relay. There is also a handbike marathon as well as 10km walking and nordic walking. The running festival is rounded off with the children’s and family day including the Breakfast-run, FunRun, KidsRun and a colourful supporting programme around the town hall on 17 April 2021.

The HAJ Marathon holds both a silver label from World Athletics and the “five-star classification” by the European Athletics Association.

Everything to do with the race is close at hand. The Marathon EXPO, live-music, pasta party, numbers pick-up, bag drop, business village and much more are located near to the start and finish area. Hotels of all categories are located very close by.

The diverse route leads past a number of the sights of the city such as the Welfenschloss, the Opera House, the Maschlake and the sculpture mile with the world-famous “Nanas”.

With just 20m change of altitude, the HAJ Marathon is one of the flattest and fastest routes in Germany – ideal for personal bests and ideal for hosting the national championships, where runners can also qualify for the Olympic Games in Tokyo.

“To host the championships is a great honour and a confirmation of the development of the event in recent years,” declared organiser Stefanie Eichel. “We won the organisers award from German Road Races (GRR) in 2017 and see this as an obligation to further develop the image and quality of our marathon.”

In recent years Hannover has evolved into one of the absolute running hotspots of Germany. The number of participants steadily increased to surpass 30,000 for all competitions before the 2020 edition, like all other major events, had to be cancelled.

A large number of activity points along the course, enthusiastic spectators and a highly charged emotional atmosphere ensure runners’ motivation.

Sustainability and environmental awareness are constant themes. Eichl mentions the separate onsite waste-separation station, digital services, reusable finisher bags and QR codes on the start numbers. “We have initiated many actions and every year try to set new targets. Through the marathon we want to raise the awareness of our participants all year round – and also among the spectators.”

Hannover is very easily accessible by plane, train or car. The former EXPO metropolis can easily be reached by all means of transport and from all over the world. With highlights such as the “Herrenhausen Gardens”, the picturesque Maschlake in the centre of the city, or the “Adventure Zoo” – Hannover is always worth a trip.

We look forward to welcoming you.